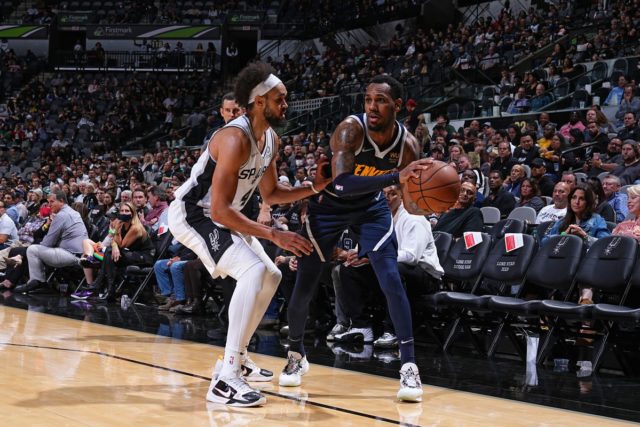 SAN ANTONIO — The San Antonio Spurs snapped a two-game losing streak with a 123-111 victory over the Denver Nuggets at the AT&T Center on Thursday night to open up a two-game home and home series.

The victory is the ninth of the season for San Antonio, who got Devin Vassell back in the lineup. Keldon Johnson missed the game after spraining his ankle against the New York Knicks.

“It was a good, competitive night,” Spurs coach Gregg Popovich said. ”A lot of guys played well. We had one little period where we got a little sloppy, three or four turnovers, five or six possessions, there for a short period of time, but the defense held up and that allowed us to continue to play well.”

San Antonio built an 18-point lead and used hard-nosed defense as the Nuggets never led in the game. The Spurs were red-hot from downtown, finishing the game 15-for-35 from three-point land.

Walker went 3-for-5 from deep.

”I just have to have that mindset of being aggressive,” Walker said.

Meanwhile, the Nuggets were led by Nikola Jokic‘s triple-double as he posted 22 points, 13 rebounds and 10 assists. Aaron Gordon added 25 points and Will Barton had 19 for Denver, who will close out a long seven-game road trip on Saturday.

Denver (12-13) is struggling with injuries. Jamal Murray is out indefinitely after having knee surgery while both P.J. Dozier and Michael Porter Jr. are out for the rest of the season.

The San Antonio Spurs are now 9-15 on the season and will return to the court on Saturday when they face the Nuggets on Saturday night at the AT&T Center.