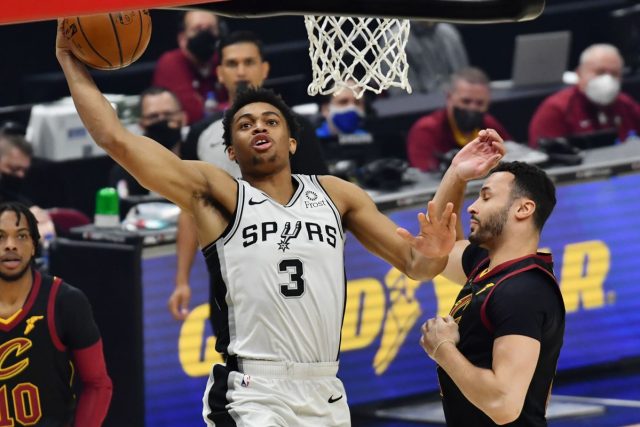 The San Antonio Spurs held off a late fourth quarter rally by the Cleveland Cavaliers to a earn a 116-110 victory over the Cavs to continue their East coast road trip.

The win is the third straight for San Antonio, who improved to 3-0 on their East coast road trip with two games remaining.

Keldon Johnson had himself a career night, scoring 23 points and pulling down a career-high 21 rebounds. Dejounte Murray had 22 points while DeMar DeRozan scored 20 points and seven assists in his return to action after missing four games for the funeral of his father.

Johnson became the first Spurs player since Tim Duncan to post a 20-point, 20-rebound game. Duncan did that back in 2013.

”It’s definitely an honor to be in the company of one of the greats, but I have to keep going, keep pushing, can’t be satisfied,” said Johnson. ”You’ve just got to fight, man. You’ve got to want it every play, got to go get it. I just try to be myself – Keldon Johnson – out there.”

The Spurs led by 22 points but Cleveland outscored the Spurs 44-35 in the fourth quarter. Cleveland made it 114-110 on a late 3-pointer but two free throws from Murray would seal the deal for San Antonio.

The Spurs are now 22-16 on the season and will return to the court on Saturday when they face the Milwaukee Bucks at 8 p.m. from Wisconsin.