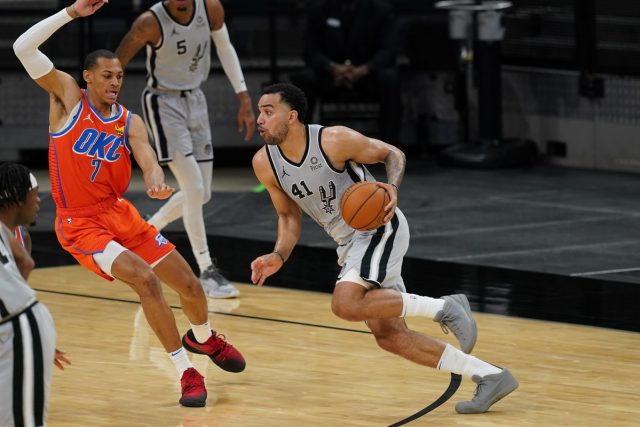 SAN ANTONIO — The San Antonio Spurs went into the All-Star break by falling to the Oklahoma City Thunder 107-103 at the AT&T Center on Thursday night.

The loss is the second in the last three games for San Antonio, who played without LaMarcus Aldridge, Rudy Gay, Derrick White and Devin Vassell.

You can get a betfair promo code for info on the Spurs post all-star break schedule, but the Spurs would have loved to have finished off the first half of their schedule strong.

“Sure, we wanted to get the game tonight,” Spurs Head Coach Gregg Popovich said. “But if you think about the last 3 we played, with so many guys out, starting with New Orleans and (Brooklyn) and New York, your worst nightmare is that 3rd in 4 nights when you have had 3 tough ones in a row and you have played so well.”

In case you missed it, here are three takeaways from the game:

The Spurs committed 19 turnovers in the game on Thursday, which led to 26 points for Oklahoma City. Seven of those 19 came in the third quarter where the Thunder outscored the Spurs 31-23.

“We are not a team that gives up 26 points on turnovers, so it’s a clear indication of being sloppy, being a little bit tired,” Popovich said. “We needed a couple of better performances out of 2 or 3 people. But it’s going to happen.”

Spurs play better against SGA but he still burns them

Without a doubt, the Spurs played much better defensively against Shai Gilgeous-Alexander on Thursday but he still managed to burn them.

He had 33 points while teammates Mike Muscala added 18 points, and Luguentz Dort had 15.

If the Spurs somehow manage to miss the postseason for a second straight season, they will look at Thursday night as one that got away from them. San Antonio led by 14 points in the game and the Thunder were on the second night of a back-to-back.

Despite missing key players, this is one game the Spurs should have had. Especially with a “brutal” second half of the season still to be played.

“Brutal schedule,” Spurs guard Patty Mills said. “And it is only going to get much, much worse in the second half, that’s for sure.”