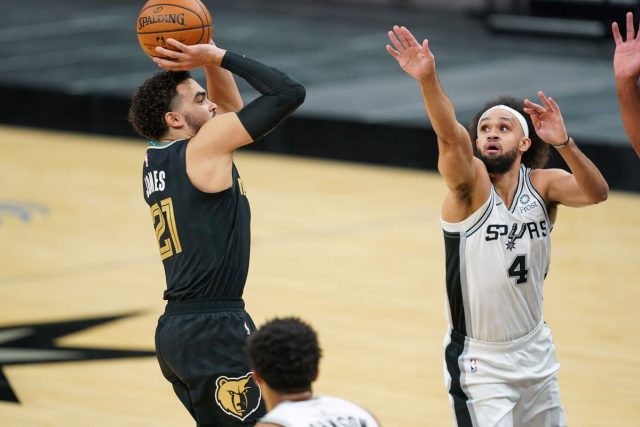 SAN ANTONIO — The San Antonio Spurs faced a hungry Memphis Grizzlies team on Saturday night at the AT&T Center but fell 129-112 to have their two-game winning streak snapped.

San Antonio had a full roster available to them for the first time all season as Derrick White returned after missing time with a fracture in his toe. However, a healthy squad was no match for a hungry Memphis team.

The Grizzlies hit career-high’s in three-pointers, assists, and scored a 129 points. The 129 points from Memphis is the second most points San Antonio had given up this season.

“We just got outplayed,” said Spurs Head Coach Gregg Popovich, who declined to use the back-to-back schedule as an excuse for his team’s play.

De’Anthony Melton led the way for the Grizzlies, scoring 20 points and pulling down five rebounds. Ja Morant posted a double-double with 19 points and 11 boards while Kyle Anderson added 16.

Memphis played without several key players due to COVID health and safety protocol but it seemed to not matter in the end.

Derrick White returned to the court and shined, scoring 18 points to led San Antonio. He shot 54 percent from the field and connected on half of his attempts from three. He was aggressive and smart with the basketball, shaking off the early rust from the first quarter.

“I think he did very very well for having been gone a while,” Popovich said.

Once White gets more games under his feet, he should be a main cog to a Spurs offense that has seemed to figure things out for the most part despite Saturday’s setback loss.

Pop said the Spurs got outplayed and the numbers look to back up his comments. The Spurs gave up 51 points from three-point land, the second most they had given up this season.

The Grizzlies scored 62 percent of their shots in the paint, a Achilles heel for San Antonio much of the season. Memphis also took advantage of the Spurs’ turnovers, scoring 24 points off San Antonio’s 14 give aways.

San Antonio should be able to clean these things up and won’t have to wait long as they will face Memphis on Monday.

It was a frustrating night for DeMar DeRozan, who scored just five points on six shot attempts. He picked up a technical foul in the second quarter and never seemed to really have much flow offensively.

DeRozan will bounce back and with White’s scoring ability, should have an easier time on the offensive end.

The Spurs are now 11-9 on the season and will return to the court on Monday when they face the Grizzlies at 7:30 p.m. at the AT&T Center.