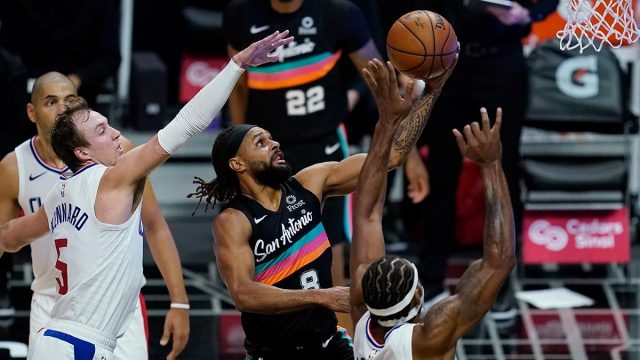 San Antonio Spurs guard Patty Mills is the last member left on the team from the 2014 Championship roster, but starting on August 2, Mills’ future in San Antonio will be unknown since he’ll be an unrestricted free agent.

Before reading about Mills, you can read about DeMar DeRozan and Rudy Gay, who we’ve already written about as Spurs players heading into unrestricted free agency.

Mills just completed his 12th NBA season and 10th straight season with the Spurs. Mills was once again a core part of the Spurs’ bench rotation where he played in 68 of the team’s 72 games with averages of 10.8 points, 2.4 assists, 1.7 rebounds, and 0.6 steals in 24.8 minutes per game.

Mills was the Spurs’ leading shot taker and maker from the 3-point line with 161 makes and 429 attempts from distance. Mills began last season wanting to be more aggressive on the offensive end, similar to how he plays with the Australian National team, and he did that for the first few months of the season, where he averaged 14 points per game in January, and then by the end of March, he was averaging 12.8 points per game while shooting nearly 40% from outside.

Last season Mills earned $13.5 million and according to ProFitX, the production he brought to the Spurs was equal to that of a player earning $11.1 million. Despite his drop in efficiency in the last two months of the season, Mills is still projected to get a new contract in the low range of $10.9 million to the high range of $14 million per ProFitX. The production Mills brought to the Spurs was similar to that of a starter, and he’s projected to continue to bring that type of production in the next two seasons despite getting older per ProFitX.

ProFitX is a dynamic financial and performance index powered by Artificial Intelligence with front-office optics displaying 17 visual and time-series models for 480-plus NBA athletes. The Athledex models historical, dynamic, and future performance data to monitor and project insights on contracts, performance, injuries, team fit, development, and potential. Follow them on Twitter at @ProFitXAI and on Instagram.

The question though is whether a team will offer Mills a contract that’s for more than the mid-level exception ($9.5 million) or taxpayer exception ($5.9 million)  in an offseason where not many teams are projected to have cap space without losing key players from their team. For the teams that do have cap space, there are other guards that will be available in free agency as well, such as Dennis Schroder, Mike Conley, Tim Hardaway Jr., Lonzo Ball, and Reggie Jackson.

The Spurs could look to try to bring back Mills since they’re projected to have $49 million in cap space, but with Mills turning 33 next season, they might want to continue to shift toward their youth movement by giving Tre Jones more opportunity as the backup point guard, or their could make Lonnie Walker IV one of the go-to players off the bench unit.

If Mills wasn’t with the Spurs, ProFitX’s Team Fit AI model sees the Thunder, Kings, Trail Blazers, Pistons, and Pelicans as the five best teams that would fit Mills’ skillset best on their team. Most of those teams can only offer the $9.5 million mid-level exception and only Portland is a current playoff team out of the group.

Data from NBA.com/stats and Basketball Reference.