After having defeated the Los Angeles Clippers in dominating fashion on Thursday night, the San Antonio Spurs didn’t have the same type of outcome against the Golden State Warriors on Friday. 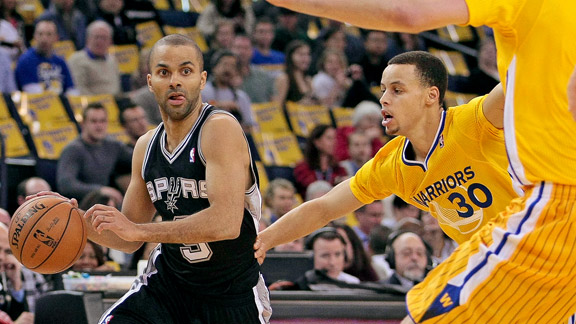 A day later, with legs possibly tired and bodies fatigued, the Spurs were defeated by the Jarrett Jack and Stephen Curry led Warriors 107-101, only it took overtime for the Warriors to end the Spurs’ 5-game winning streak.

If the Spurs were due a rough shooting night, Friday was that night as the team only shot 39% from the field and connected on just 4-of-22 three pointers, while their leaders, Tim Duncan (19 points, 13 rebounds, 4 blocks), Danny Green (20 points), Tony Parker (18 points), and Manu Ginobili (18 points) all almost took as many shots as points that they made.

Here are three points from the Spurs’ first lost to the Warriors after winning 16-straight games against the Warriors consecutively.

As much as the Spurs might have been a bit fatigued, credit has to be given to the Warriors’ young stars as Jack (30 points, 10 assists) was the playmaker in the fourth quarter where he scored 10 points and knocked down a major 3-pointer late in the fourth to give the Warriors a substantial lead. Curry used his quickness throughout the night to get into the lane and find his teammates or hit jumpers as he ended the night with 19 points and six assists. David Lee was the work horse in the paint getting extra possessions and scoring on the Spurs’ frontline as he dominated the glass with 25 points and 22 rebounds. Klay Thompson (10 points) was also a major piece defensively for the Warriors as he was the one who used his quickness and length to defend Parker for a majority of the second half.  The young Warriors kept the Spurs on their toes throughout the night as they outscored the Spurs 25-2 in fast break points.

2.     More on the offensive struggles

With missed shots, whether open or contested, the Spurs’ offense struggled throughout the night. The team only managed to pass for 17 assists on 37 made baskets. Green made all four of the Spurs’ four 3-pointers, yet he too missed five 3-pointers. Even the stars, which had to take on heavy minutes, were missing a large amount of shots as displayed here.

Though the Spurs only turned the ball over nine times in the game, some of their worst turnovers came in the fourth quarter and overtime after the team had earned a 13-point lead early in the fourth quarter. Tiago Splitter and Kawhi Leonard both pitched in with 10 points in the loss.

Ginobili led the bench with 18 points, but outside of him, the Spurs’ bench was a ghost town. Minus Ginobili, the Spurs’ bench shot 2-of-14 on the night; most significant was Gary Neal who missed all six of his field goal attempts in the game.

The Spurs will have Saturday off, but they will make their final stop of the Rodeo Road Trip in Phoenix against the Suns on Sunday. The Suns are currently dead last in the Western Conference at 18-28, have lost two straight games, and are 2-8 in their last 10 games. The Suns are also just 12-14 at home this season, while they have six wins and 23 losses against winning teams like the Spurs.

Here are a few stats showing where the Spurs stand in certain categories in the NBA.