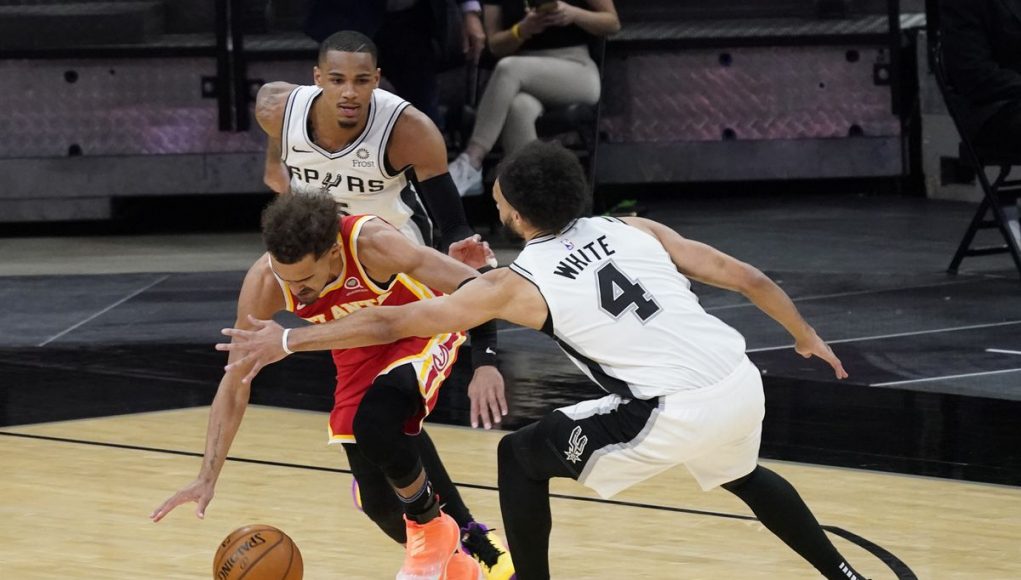 SAN ANTONIO — The San Antonio Spurs continued their homestand on Thursday night but fell 134-129 to the Atlanta Hawks in a double overtime thriller at the AT&T Center.

The loss is the second in the last three games for San Antonio, who have lost six of their last eight games overall.

“They’ve showed a lot of grit and a lot of just downright fiber of hanging in, playing tough,” Spurs Head Coach Gregg Popovich said of this team’s effort. “This was three in four nights after what they have already gone through schedule-wise. So I’m happy that they don’t die.”

Atlanta led by as many as 11 points and took control early, outscoring the Spurs 32-22 in the first quarter. The Hawks had five players score in double figures, led by Trae Young and Clint Capela, who combined to score 56 of the Hawks’ 134 points.

Bogdan Bogdanovic added 28 points while connecting on 4 of 5 3-pointers, including one to give the Hawks the lead for good.

The Spurs rallied to force the first overtime, using a 9-3 run to end regulation. DeMar DeRozan finished with a game-high 36 points and and nine assists, including tying the game to force overtime. Derrick White added 29 points and shot a career-high 7-for-13 from beyond the arc.

Rudy Gay came off the bench to score 18 points and hit the game-tying three-pointer to force the second overtime. For the game, the Spurs finished 13-for-40 from deep.

Big man Jakob Poeltl had 14 points and 10 rebounds in a losing effort.

“This whole complete season is something unique that years down the line we will all talk about, say how crazy it was, say how crazy the scheduling was,” DeRozan said. “But there is nothing we can do about it now but get through it and continue to fight.”

The Spurs are now 24-24 on the season and will return to the court on Saturday when they welcome the Indiana Pacers to the AT&T Center at 8 p.m. to close out their nine game homestand.