The San Antonio Spurs have lost six straight games and their once strong grip on the NBA’s best record is now a mere 1 1/2 games over the Los Angeles Lakers who have won nine straight. 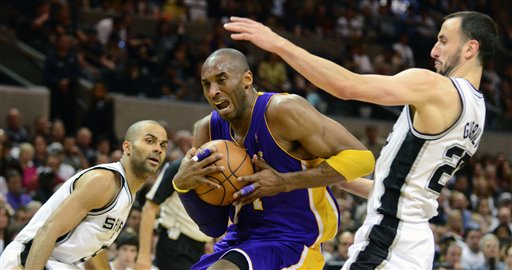 Now with San Antonio slumping, the Lakers know the number one seed in the upcoming NBA playoffs is well within reach:

“We want the best record in the league and we want first place,” said Andrew Bynum.

And when Lamar Odom was asked if passing the Spurs has become a realistic goal at this point, he said, “I think so.”

But what does Lakers’ coach Phil Jackson have to say on overtaking the Spurs?

“It’s simply this,” Jackson said. “We’ve played very well [but] you can go out and have a stinker like we had in the first half [Friday] and lose a ball game, not have that energy in the second half to come back and win. It’s asking a lot of a team to continue at that pace and expect them to play at that pace. We want to do it and have every urgency to do it, but the odds are against us. It’s still a real tough thing to do.”

The Spurs and Lakers will face off once more before the playoffs begin and if San Antonio does not get things back on the winning track, then Los Angeles will overtake the Spurs.

It’s simply this — should Los Angeles win their remaining games, they get the number one seed. Makes their last meeting quite important doesn’t it?