In a game where Tony Parker, Richard Jefferson, Tim Duncan and George Hill played more than than expected, it was one player that kept the San Antonio Spurs in their preseason opener against the Rockets.

And no that is not a typo. The player several expected could be cut next, got a lifeline when Tiago Splitter suffered an injury. After his performance last night, he may not be going anywhere anytime soon.

In 24 minutes, the former Houston Cougar had 10 points, eight rebounds, two blocked shots and one steal. 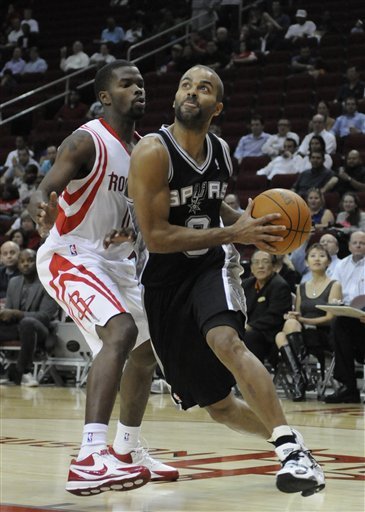 Unfortunately it wasn’t enough as the Rockets beat the Spurs 90-87.

The Spurs came out of the gates hot, putting up 32 points in the first quarter. Tony Parker and DeJuan Blair got off to a quick start and ended the quarter with eight points apiece.

In the second quarter, the Rockets stepped up their defensive efforts, Jordan Hill came alive and the Rockets’ second unit fought back to tie the game up 50-50 at halftime.

The third quarter was a mirror image of the second, but two of Houston’s starters, Aaron Brooks and Kevin Martin, got hot. Martin connected on several of his outside shots while Brooks shredded the interior defense to get to the basket.

Kirk Penney started the second half, and Garrett Temple and James Gist also saw playing time in the third quarter alongside Cousin.

While the second and third quarters belonged to the Rockets, the Spurs showed more life in the fourth quarter. The Spurs went on a 9-2 run before Courtney Lee ended it with a reverse layup with just over two minutes remaining.

Spurs rookie James Anderson entered the game midway through the fourth, but he forced shots, and was called for an offensive foul and traveling. However his layup with less than a minute remaining brought the Spurs within one point. After a foul put Lee on the line, Jerrells missed a half-court desperation three to try to send the game into overtime.

Aside from Cousin, two other spurs scored in double figures. Blair ended the game with 12 points, eight rebounds (5 offensive), and two steals in 19 minutes. Parker finished with 10 points and five assists in just under 17 minutes.

The loss leaves the Spurs at 0-1 for preseason, but they’ll look to even it up this Saturday when the Miami Heat come to San Antonio.