The Denver Nuggets will have the 22nd pick Thursday in the 2011 NBA draft. Though Denver finished with the fifth seed in the Western Conference after they traded their superstar Carmelo Anthony to the New York Knicks, Nuggets fans are still uncertain for the future as many of the players on their roster are available in free agency. 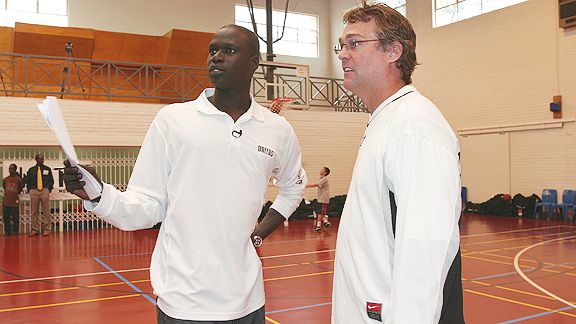 The Denver site DenverStiffs.com, looks to the Spurs’ past draft success as a means of selecting players late in the first round.

George Hill, Tiago Splitter, Ian Mahinmi, Beno Udrih, Leandro Barbosa, John Salmons – what do all of these players have in common?  The first is that they’re all playing in the NBA and are either starters or solid rotational players.  The second is that they were all drafted after the 22nd pick, the pick that the Nuggets have this year.  The last is they were all drafted by the San Antonio Spurs.  I’m going to take this a step further in a biased way (ignoring San Antonio’s few misses in later rounds) and throw in Manu Ginobili (picked 57th), Luis Scola (picked 55th), Goran Dragic (picked 45th), and DeJuan Blair (picked 37th).  Contrast this to the Denver Nuggets who have a tough time hitting on top 10 picks, let alone late first round picks.  Since 1999, the Spurs have hit on EVERY single late 1st round draft pick.  The Nuggets are about 50% on similar picks.

Here is a list of what some of the Spurs’ past international and American draft picks have done in the NBA.

Manu Ginobili – Where do we begin? Three-time champion, two-time All-Star, and his injury this season may have been the reason why the Spurs’ 2011 playoff run ended so quickly. Did I mention he made the All-NBA third team at the “young” age of 34?

Tony Parker – Three-time NBA Champion, 2007 NBA Finals MVP, three-time All-Star, and he is still one of the quickest guards in the NBA not named Derrick Rose. His tear drop is still lethal and he’s just 29 while in the prime of his career.

Luis Scola – Scola never wore a Spurs uniform, but Houston Rockets fans are in debt to the Spurs’ management for selling the team his rights. Scola’s tough, rugged play keeps the Rockets as one of the most competitive teams in the NBA season after season.

George Hill – The Spurs found Hill out of IUPUI? Only folks from IUPUI even knew what that meant. Hill is becoming a highly efficient, defensive wing in the NBA. He is can also turn into an automatic scoring machine in the NBA when he goes into attack mode.

Tiago Splitter – Though he had an injury-riddled regular season, he was able to become an active player off the bench and showcase himself in the first round in the playoffs. He is presumed to be the starter alongside Tim Duncan in the upcoming season for the San Antonio Spurs.

DeJuan Blair – The Spurs took a chance on a kid with no ACLs and for the first half of this past season, he was becoming one of the most versatile undersized centers in the league and starting for the number one team at the time. Though his production declined through the second half of the season, he still has the talent to change his doubters minds.

Ian Mahinmi – After having an injury-slated time with the Spurs, Mahinmi ended up winning an NBA Championship with the Dallas Mavericks. If you watched game six of the NBA Finals, you’ll see that Mahinmi scored the buzzer beating shot in the third quarter. If Mahinmi continues to get minutes next season, his role with the Mavericks could increase.

Beno Udrih – He won two championships with the Spurs in 2005 and 2007 as a backup. He became a starter for the Sacramento Kings before Tyreke Evens joined the team. Today, he is still a usable point guard with the Kings.

Leandro Barbosa – Though he never dawned a Spurs uniform, he had stellar seasons with the Phoenix Suns and was even regarded as one of the best sixth men for a few seasons. If he is put on a contender, he immediately becomes a strong weapon for that team.

John Salmons – Salmons too never wore a Spurs uniform, but he’s been a great role player with several teams and has the ability to carry a team between quarters.

Goran Dragic – He never wore a Spurs uniform either, but he had one of the most magical runs for a guard during the second round of the 2010 NBA playoffs as he helped the Phoenix Suns get past their longtime rival, the Spurs. Dragic is a Rocket today, but he is still very young and has the pedigree to continue to become an impact player.

Is Ryan Richards, Nando De Colo, or Thursday’s draftee to be the next hidden gem? Only the future will tell.