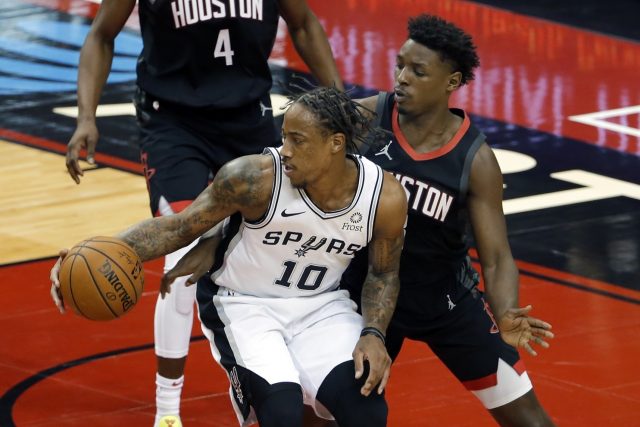 The San Antonio Spurs closed out their season series with their in-state rivals, the Houston Rockets, earning a 111-106 victory at the Toyota Center on Saturday night.

San Antonio opened the scoring with a nice pop-a-shot from Keldon Johnson on the Spurs’ first possession of the game, putting the visitors up 2-0. San Antonio used their defense and turned it into offense as Jakob Poeltl blocked Rockets big man DeMarcus Cousins on one end and Dejounte Murray scored on the other, putting the Spurs up 11-6 as Houston called the first timeout of the game.

DeMar DeRozan led by example on Saturday night, pouring in 30 points for the second consecutive outing. He set the tone for the Spurs’ offense, scoring nine of his 30 points in the first quarter.

He started things out with a layup over the outstretched arm of DeMarcus Cousins, hit an open corner three, and used a Poeltl screen to hit the open midrange jumper. From there, he found his teammates for buckets and hit the board for rebounds.

“He’s having a wonderful year,” Spurs coach Gregg Popovich said of DeRozan. “He’s been a great leader. He’s really been detailed in his approach to games. He’s been our go-to guy game after game after game.”

San Antonio’s defensive effort shined on Saturday, holding Houston to just 31 percent shooting from beyond the arc. They also held the Rockets below 30 points in 3 of the 4 quarters, the first time that’s happened since they defeated the Washington Wizards earlier this season.

Without LaMarcus Aldridge in the lineup, the Spurs’ young guys took the reins to help DeRozan in the scoring column. Derrick White had 14 points in his first start of the season while Drew Eubanks came off the bench to score 12 points.

This is a sign of things to come with this team as they are now 13-10 and will play their next two games against the Golden State Warriors.