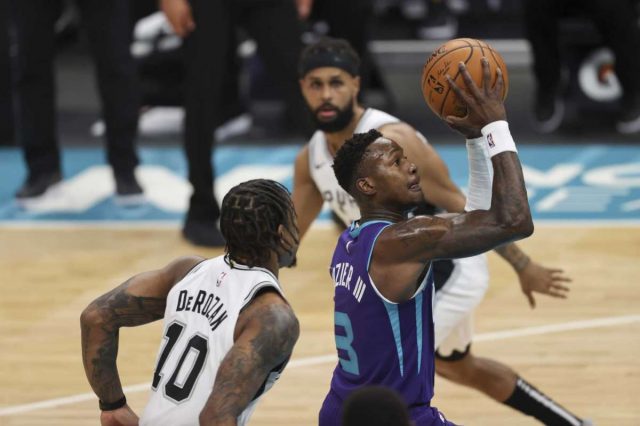 The San Antonio Spurs spread the love in Charlotte on this Valentine’s Day as they defeated the Charlotte Hornets 122-110 at the Spectrum Center on Sunday night.

The victory is the second straight for San Antonio, who are now 2-0 on their annual Rodeo Road Trip. The Spurs have won five of their last six games and sit in sixth place in the Western Conference as of this writing.

San Antonio struggled out of the gate, trailing 31-17 with Charlotte going on an 11-0 first quarter run. Terry Rozier scorched the Spurs with 16 of the Hornets 33 points in the opening period.

Rozier poured in 33 points for the Hornets while Malik Monk added in 23.

White gets back to form

Derrick White put together his best performance since returning from injury, scoring 25 points on 9-for-15 shooting to go along with four rebounds and four steals. He also went 4-for-8 from three point range.

White looked confident in his shot, he was aggressive, and his teammates were looking for him on the offensive end, particularly in that fourth quarter. Together, he and Murray combined for 51 of San Antonio’s 122 points.

“He made a lot of wise plays that we’re used to,” Popovich said of White. “It’s what we’ve been waiting for, but it seems for the past couple of years, one has been injured. We’re thrilled to have them out there.”

Taking a load off

With White and Murray playing well, DeMar DeRozan took the night off in the scoring column. He had just eight points and took eight shots. Instead, he dished out nine assists and had two steals.

If White and Murray can become a lethal combo, adding DeRozan into the mix would take the Spurs into another level as the season gets ready to turn another page.

Spurs big man Jakob Poeltl had another solid outing on Sunday night. He scored eight points and pulled down 12 rebounds while dishing out two assists.

He stayed aggressive and crashed the boards, showing his comfort level that earned him the starting position a year ago.

The Spurs are now 16-11 on the season and will return to the court on Tuesday night when they face the Detroit Pistons at 6 p.m. to continue their Rodeo Road Trip.