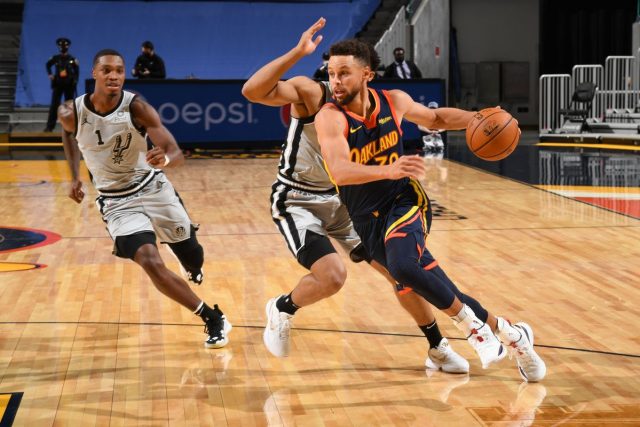 The San Antonio Spurs could not overcome a slow start as they fell 121-99 to the Golden State Warriors at the Chase Center on Wednesday night.

The defeat snaps a two-game winning streak for San Antonio, who dropped from fifth to eighth in the early Western Conference standings with the loss.

Golden State took control of the game early on, taking a 36-24 lead into the second quarter. From there, the Warriors would extend their lead to 18 by halftime and never look back.

Stephen Curry led Golden State with 26 points 11 rebounds, and seven assists. Rookie James Wiseman added 20 points and six rebounds while Draymond Green dished out six of the Warriors 31 assists on the night to along with nine points.

The Warriors shot 15-for-38 from three-point range with Curry hitting 4-of-8 shots from deep. Andrew Wiggins and Curry combined for seven of the Warriors 15 three-pointers on the night.

Meanwhile, San Antonio struggled from the opening tip. Dejounte Murray led the way for the Spurs with 22 points and six rebounds but from there, it was a struggle for the rest of the squad.

“I think we just came out in the first half and just got punched in the face,” Murray said.

LaMarcus Aldridge and and Lonnie Walker IV combined for seven points on 3-of-18 shooting from the floor. DeMar DeRozan had 15 points but shot just 37 percent from the field.

“I thought we had a bad start,” Spurs Head Coach Gregg Popovich said. “They jumped on us at the beginning of the game. If you shoot 4/33 from three, your defense better be perfect.”

The Spurs are now 8-7 on the season and will return to the court on Friday when they welcome the Dallas Mavericks to the AT&T Center to kick off a stretch of nine of their next 11 games at home.