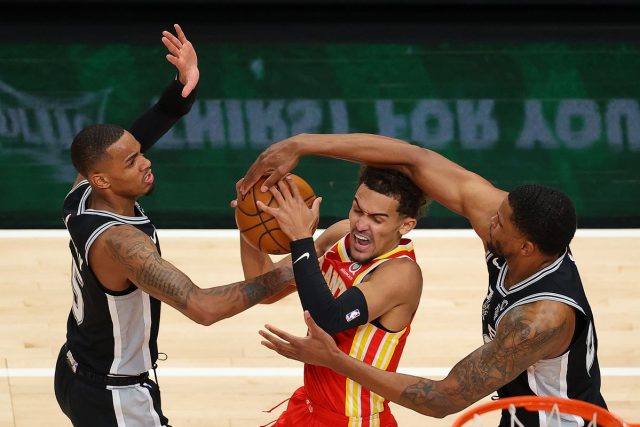 The San Antonio Spurs opened up their annual “Rodeo Road Trip” with a dominating 125-114 win over the Atlanta Hawks on Monday night. While the final score was close, the game was not as the Spurs lead by as many as 42 points at one point.

“We just wanted to come out and make our stamp on the game early,” Spurs guard Derrick White said. “This is a huge seven games. … It’s a good start for us.”

White got the start and posted 11 points and four assists.

Atlanta (11-14) was led by Trae Young’s 25 points while Clint Capela was the only other member of the Hawks in double figures with 14 points and 11 rebounds. The Hawks role players struggled from the opening tip, a credit to the San Antonio defense, who outscored the Hawks 41-19 in the second period.

“Our starters weren’t very good,” Hawks coach Lloyd Pierce said. “They weren’t good at all. Our second unit did a good job of making the night somewhat decent.”

The Spurs used a 16-0 run while leading 55-41 to pull away for good, scoring a season-high 77 points in the first half. Their previous high in a half was 66 points in a road win against the Memphis Grizzlies on December 23.