Ex-Texas Longhorn and former San Antonio Spurs guard T.J. Ford knows what it takes to make it in the NBA. The highs, lows, the battles and just 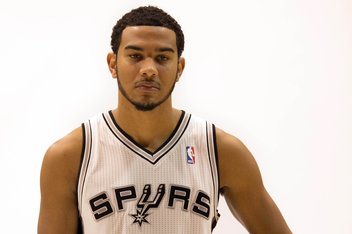 trying to fit in with the right team at a high level is taxing on young players.

And this struggle wasn't lost with Cory Joseph.

Cory saw himself drafted after one year with Texas, then found himself buried on the bench, playing spot minutes for San Antonio and then racking up mileage between San Antonio and Austin to play with the D-League Austin Toros.

Needless to say, this took a toll on Cory last season and it shook him emotionally to the point that he second guessed himself according to his fellow Texas alum Ford.

"Cory, yeah, did he get down on himself? Did he second guess himself? Yes. And that's why you gotta have a good support system to continue to keep you working. And that's what is great about the San Antonio Spurs organisation. They keep guys mentally focused and they encourage you and they help you."

This is totally understandable for any young player in the league. Joseph jumped from college to the pros just after his freshman year in Texas. He went from being "the man" to minor role player.

However, after a solid showing in the NBA playoffs last season backing up Tony Parker, improving his defense, and impressing at the 2013 Las Vegas Summer League (and not to mention leading Team Canada at the FIBA Americas tournament), Cory's days of second guessing himself look to be coming to a close.

There is no doubt he will have to fight for minutes next season with the way the Spurs current roster is packed with guards. However, his summer play might give him the edge he needs to solidify the backup point guard role next season.

Since his rookie season, he has gone from just 9.2 minutes per game to 13.9 last season. Granted, the increase in playing time was due to Parker's injury last season but that might have been what was needed for Cory to show he does belong at the NBA level and shake off any self doubts.

And if he keeps making strides in the right direction, he could be seeing himself a regular rotation player, and full of confidence.