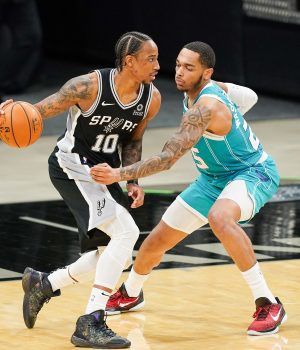 SAN ANTONIO — The San Antonio Spurs opened a nine game homestand on Monday, falling 100-97 to the Charlotte Hornets (21-21) at the AT&T Center.

The loss is the second straight for San Antonio, who is 5-5 in their last 10 games overall.

San Antonio’s struggles to start games continued as the Spurs found themselves down 10 points after the first quarter. While the Spurs played better for a good portion of the game, they had no answer for Gordon Hayward, who finished with 27 points while shooting 48 percent from the floor.

“He killed us,” Spurs Head Coach Gregg Popovich said of Hayward. “His offense, we just didn’t stop. No matter who guarded him, he beat them. Either for himself or finding somebody for a three. He was the X-factor tonight, for sure.”

The Spurs put together a much better second half, outscoring Charlotte 24-19 in the third quarter. DeMar DeRozan did his best to help the Spurs to victory as he put up 10 of his 28 points in the final quarter. Derrick White added 21 points, while hitting 5-of-9 three pointers.

Patty Mills and Rudy Gay came off the bench to combine for 20 points but Lonnie Walker struggled, going 1-for-3 in just eight minutes of action.

“Once we can really string a full 48 minutes together, I think we are going to be really, really tough,” Mills said. “We are on the doorsteps of us playing the right way and the way we want.”

The Spurs are now 22-18 on the season, sitting seventh in the Western Conference. They will return to action on Wednesday night to welcome the LA Clippers to the AT&T Center to begin a mini “series”.