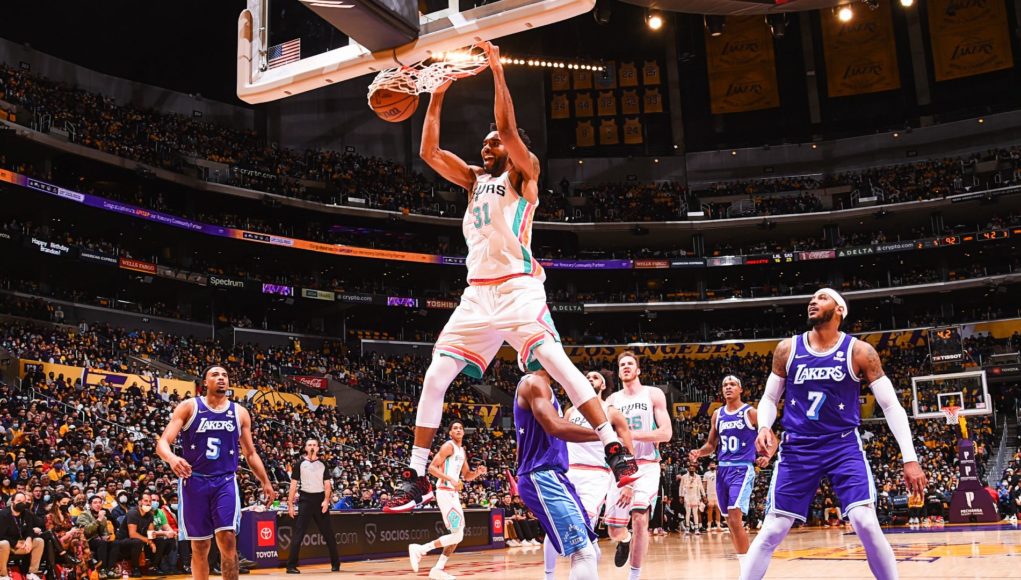 The San Antonio Spurs closed out the Staples Center era with an old fashion beat down of the LA Lakers, earning a 138-110 victory on Thursday night.

Keita Bates-Diop scored a career-high 30 points for San Antonio, shooting 100 percent from the floor. Derrick White had 23 points and Lonnie Walker added 21 for San Antonio to help them close out the Staples Center era in style.

The building is changing its name to Crypto.com Arena on Christmas Day, in a mega-deal worth $700 million over 20 years.

”Keita was ridiculous,” Spurs head coach Gregg Popovich said. ”Did a fine job at both ends of the court. We could hardly guard LeBron, but he did his best. Really was a team effort, because I thought some of the (bench) guys outplayed the starters.”

Bates-Diop made his mark in the second half, scoring 20 points in the half while connecting on all five three-pointers. Defensively, he did his best to contain LeBron James’ efforts to get the Lakers a win.

”I was playing the game, reading the defense, moving around,” Bates-Diop said. ”I don’t think I dribbled that much. My teammates just found me. … (James) is a great player, but you’ve got to guard him and just not get star-struck by him.”

San Antonio led by as many 28 points, outscoring the Lakers 33-18 in the fourth quarter and building a big enough lead that made any hopes of a Los Angeles comeback impossible.

James did what he could to keep the Lakers in the game, scoring 36 points and nine rebounds. Russell Westbrook added 30 points for Los Angeles, who played without coach Frank Vogel and five players due to COVID-19 protocols.

Since Anthony Davis went out with a knee injury, the Lakers are winless at 0-4.

”We have no chemistry with any lineup from the simple fact that we haven’t logged any minutes,” James said. ”All of our defensive guys are in health and safety protocols. … We don’t need a full roster. We just need some of our guys back.”

The Spurs are now 13-18 on the season and will return to the court on Sunday when they welcome the Detroit Pistons to the AT&T Center to kick off a three-game homestand.