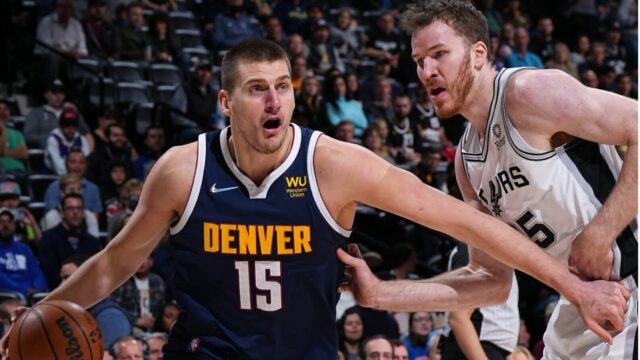 The San Antonio Spurs officially clinched the final play-in spot in the Western Conference on Tuesday night with a 116-97 victory over the Denver Nuggets at Ball Arena.

San Antonio’s win combined with some help from the Phoenix Suns, the Spurs officially locked in their spot in the play-in tournament. The Suns defeated the Lakers 121-110 later in the evening to eliminate Los Angeles from the playoffs.

”We’ve got a game on Thursday and we’re going to play that,” Spurs coach Gregg Popovich said. ”Not worry about anything else. It’s not like we’re world beaters.”

The Spurs had six players in double figures, led by Keldon Johnson and Devin Vassell, who each had 20 points.

Josh Richardson added 18 points off the bench while Tre Jones and Jakob Poeltl each chipped in 14 points.

Meanwhile, the Nuggets struggled from the opening tip. The Spurs outscored Denver 32-14 in the second quarter, taking a double-digit lead by halftime, and never looked back.

”Every team has nights like that and I think this was one of those for the Nuggets,” Popovich said. ”Nothing went right for those guys, even to start the game. … We took advantage of it.

Nikola Jokic had a game-high 41 points and 17 rebounds while Aaron Gordon chipped in 18 points and 13 rebounds for Denver, who failed to clinch a playoff berth with a win.

”It’s a bad loss for us,” said Gordon. ”We just didn’t take advantage of the opportunity that was presented to us and it’s frustrating, but we know we have two games left. Our focus is on that just now.”

The Spurs played without Dejounte Murray, who missed action with a non-COVID-related respiratory illness. Popovich expects Murray back before the regular season ends.

The San Antonio Spurs are now 34-45 on the season and will return to the court on Thursday to face the Minnesota Timberwolves at 7:00 PM.