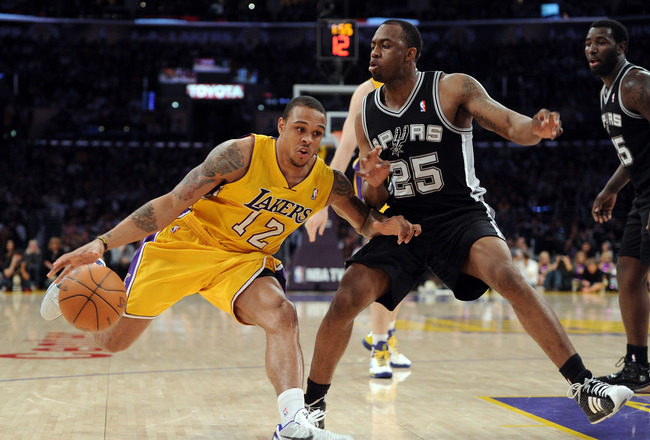 Anderson at number 20 in the first round, many felt the team got another gem late in the draft. But after two seasons in the NBA, Anderson hasn’t panned out the way many felt he would have.

He played solid in the first half of his rookie season and then was hit with the injury bug (foot injury), was sent to the D-League (Austin Toros) to rehab his injury but never really found his way back into the regular rotation.

He found himself buried in the bench, with players such as Gary Neal and Danny Green making the most of the minutes given to them while Anderson was out of action and perhaps the biggest sign his day in San Antonio could be numbered was when the Spurs didn’t pick up his team option for next season thus making him a free agent after this season.

But Anderson is taking things in stride and simply soaking in the experience of playing in the Western Conference Finals and still learning from the best franchise in the league.

“I’m not frustrated,” Anderson said at a recent shootaround. “I’m just being patient, and I know my time will come. I’m still working. It’s not my time right now, so I’m just doing my work and supporting the team.”

“You can’t ask for a better team to learn from,” Anderson said. “There’s not a better organization to help you become a professional.”

Looking at this season, the Spurs’ depth also held him from cracking the rotation and get in some steady minutes.

“We got some of the best players on this team, and it’s tough,” Anderson said. “You got to fight through a lot to get minutes and it happened the way it happened. I can’t complain.”

Anderson has all the tools needed to make an impact in the NBA. He has the size, shooting stroke, athleticism, and mindset, but he could be used as a valuable asset to trade (sign-and-trade) for the Spurs. But after two seasons, he hasn’t been a solid contributor so perhaps a change of scenery is best for James and his future in the NBA.

However, with the way Green and Neal have been playing against the Thunder in the Western Conference Finals, perhaps the team should keep Anderson and see if he can finally live up to the expectations heading into the NBA.

What do you think Spurs fans? Should the Spurs give up on James or give him one more shot and sign him?