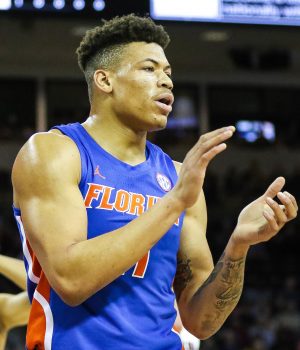 You now know who to look for in the lottery for the 2021 NBA Draft and the class is looking superb. Having said that, there are going to be plenty of nice sleepers in this draft. They might be drafted later in the first round should the Spurs’ season turn out better than expected or these prospects could fall to them in the second round.

Here are some names early in the college basketball season that you should look out for as mock drafts get fired back up for 2021. Most of these guys stayed in school another year to shore up their positions and I believe it is going to work out for them.

He’s only played one game this season, but he showcased what he can do, and that is a little bit of everything. He still has to tighten his handles as a 6-foot-5 and 229-pound wingman, but he does so many other things well. He shoots it efficiently on low volume and plays tough defense on multiple positions. If anything, he should actually be taking more triples over the course of a game, but Florida coach Mike White prefers to be a bit more balanced.

The 6-foot-3, 195-pound point guard really came into his own last season as the leader of a top tier Baylor Bears team. Butler was already an excellent shooter when he stepped on campus and has not let up early into this season either. He will have to prove he can be a true point guard at the next level, but has survived so far as an undersized combo guard in the college ranks.

The 6-foot-9, 235-pound forward was expected to go to the NBA Draft after last season. However, he had some flaws in his game exposed and so he decided to stay in Durham another season. He has already put on some more weight, which has helped him become a much better rebounder in the first couple games of the season. If he can show that he can defend better while keeping his shooting percentages close to his freshman season numbers, he will start to shoot up some boards.

The 6-foot-9, 220-pound Wagner is off to a slow start this season in two games so his stock may be dipping a bit. However, assuming his offense picks up and just even gets back to last season’s levels, he will be fine. He should be a solid 3-and-D prospect who needs to prove he can rebound this season.

The 6-foot-9 (listed at 6’8.5″, but come on) and 245-pound forward was named Third-Team All-ACC last season and is looking to build on it. He’s a senior who has drastically improved each year at Clemson. If he can rebound similarly to the way he did last season and continue shoot the ball efficiently, he should be a nice steal for someone in the second round. He already had a 24-point outburst against a big Purdue front line.

An intriguing prospect as a 6-foot-9, 215-pound guard for UCLA. He is a senior, but he is on the younger side as he will turn 21 later this month. He can post up smaller guys, he shoots it well from beyond the arc and could be a secondary ball handler with the right team. He was named Most Improved Player in the PAC 12 last season and was named to the conference’s First-Team for his efforts.