With 72 games logged this season, the San Antonio Spurs are 42-30 and they are in solid position to try to make the playoffs. Since Volume 6, the Spurs went 6-4 in their last 10 games, and during this stretch, the Spurs earned their first 5-game win streak of the season.

Now that only 10 games remain in the regular season for the Spurs, let’s look at how the offense and defense have performed through 72 contests.

During the Spurs’ 5-game win streak, their offense hasn’t been too spectacular, as they’re scoring 106.5 PP/100 during that time frame, which is just barely over their normal scoring average. However, two areas where the Spurs are excelling early offensively is with their new small ball starting lineup of Dejounte Murray, Patty Mills, Danny Green, Kyle Anderson, and LaMarcus Aldridge, and their set rotation coming off the bench.

In 211 possessions, the new Spurs starting five are scoring 118.5 PP/100, which is a number better than the best offense in the league of the Houston Rockets, by almost 5 PP/100. In second quarters during the win streak, the Spurs are also scoring 118.5 PP/100 mainly with a consistent bench group of Tony Parker, Manu Ginobili, Rudy Gay, and Pau Gasol getting the first minutes of the quarter, and then the starters will start to get put back in the game to help close the quarter.

In the second half though during the win streak, the Spurs’ offense starts to see major decreases, as they’re only scoring 97.7 PP/100. Without no sure sign of Kawhi Leonard returning this season, the Spurs will continue to put up close to league average offensive numbers in different categories with the current team.

The Spurs continue to be a team that relies on the mid-range more than most teams in the league, and the Threat Balance illustration below shows why.

Here is the Spurs’ frequency and accuracy shot chart, which I created based on Dean Oliver’s Threat Balance model. 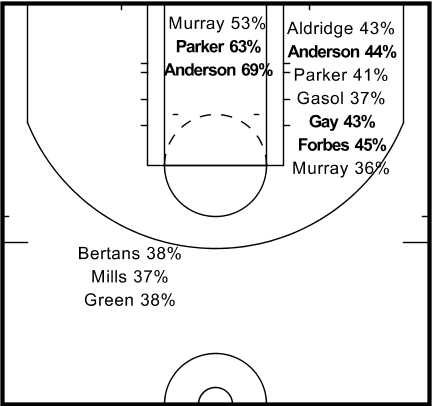 As you can see from examining the Threat Balance illustration, outside of the mid-range, the Spurs don’t have many players on the roster who continually attack the rim, or shoot from three above the 70th percentile at their position in terms of frequency. It’s tough to get a post-up player like Aldridge room to operate when he consistently has players that mostly shoot mid-range shots on the floor to surround him.

Again, if Leonard is able to make it back this season or for the playoffs (should the Spurs qualify), he’ll bring more versatility to all three areas of the floor and the addition of a player who can consistently get to the free throw line.

Using CTG’s Usage Ratings for players, I created the charts below to show the Spurs’ current starters and bench players, to display how much of the team’s possessions they’ve been using when on the floor.

With Murray being the Spurs’ second playmaker in the starting group, adding two floor spacers in Mills and Green is ideal so that Aldridge set picks on Murray drives, while Anderson can hover near the rim for cutting layups or offensive boards. When a post-up possession is run for Aldridge with the starting five, one of Anderson or Murray will hover near the rim for an offensive board or to try to get a cutting layup. This also means that one of Murray or Anderson are going to find themselves open in the corner with this starting five, and they’ll have to be willing to take that three if their defender abandons them to help on Aldridge.

What does the Spurs’ journey on offense look like? 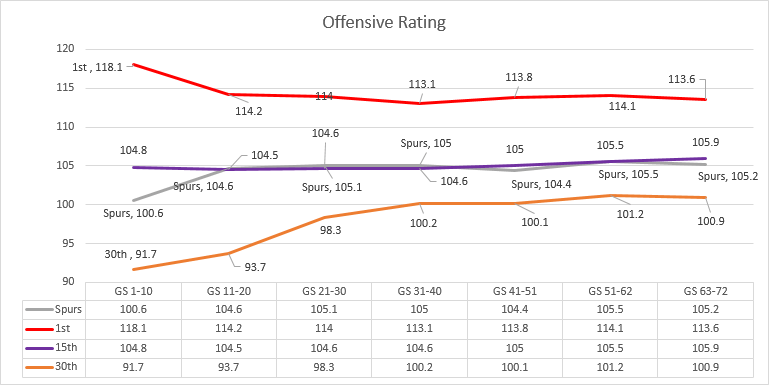 In being the 9th ranked team in terms of passes per game, the data shows the Spurs are still moving the ball, but it’s tough for their current squad to get many open scoring opportunities even with their ball movement. 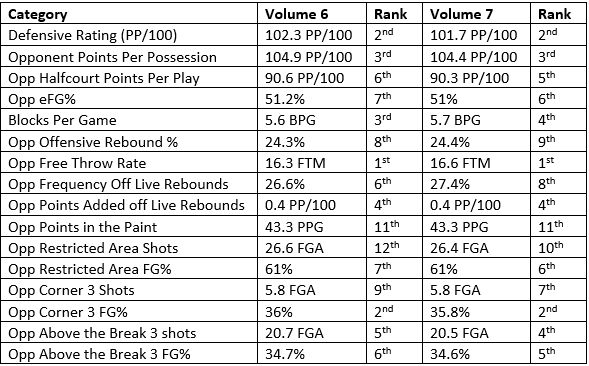 The Spurs’ play on the defensive end of the floor has been their biggest turnaround during the five-game win streak, and the players have been mentioning that several times after games. During the win streak, the Spurs’ defense is holding teams to a suffocating 89.1 PP/100, which isn’t surprising that it makes them the top defense in the league during the win streak. When the Spurs were going through a stretch of losing several games even after leading by double digits, it was because of their fourth quarter defense.

Now, the team has responded to that weakness and turned it into a strength, as they’ve been holding teams to 84.3 PP/100 in fourth quarters during the streak.

Across the board, when you look at the data in the table above, the Spurs continue to be a dominant defensive team in all the statistical areas featured. With Leonard being out for most of the season, it’ll be interesting to see if Danny Green continues to be recognized as an All-NBA level defender and if the voters will give some of the credit to Aldridge, and possibly select him for one of the All-Defensive teams.

What’s the story of the Spurs’ defense? 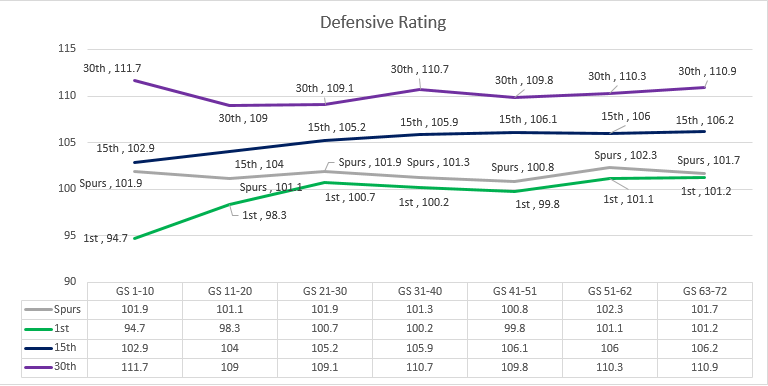 The Spurs are currently 4-9 against teams with records of .600 or above.

Beginning Friday, the Spurs’ final 10 games of the season will take place over a 20-day period. The Spurs will have five road and five home games during the stretch with one back-to-back set. Some of the opponents who can help or hurt the Spurs’ playoff positioning will be their matchups with the Jazz, Thunder, Clippers, Trail Blazers, and Pelicans.