The Brazilian team is loaded with talent, most notably Leandro Barbosa, but Tiago Splitter is the team’s true rising star. The 6-foot-11 center was named the Spanish League MVP in 2010 and will play for the San Antonio Spurs this season. With Brazilian center Nene expected to miss the tournament, Splitter will be called upon heavily, and he could have a breakout performance.

As mentioned, Nene will be out of the tournament which means more minutes for Splitter. For Spurs fans this has to raise some concerns seeing how with an increase in playing time means an increase in risk of injury.

An array of French stars are sitting out the 2010 World Championship — Tony Parker and Joakim Noah to name a few — but the team is still loaded with young up-and-comers, including 6-foot-6 combo guard Nando De Colo. He struggled in France’s pre-worlds exhibition game against the U.S. but has shown loads of potential in recent years, which led the San Antonio Spurs to select him in the 2009 draft.

de Colo has two more seasons with Valencia which will help him develop his game more. By then he should make the jump to the NBA. Recently, Valencia did increase his buy out so if the Spurs are looking to bring him over anytime soon, this could be an issue. 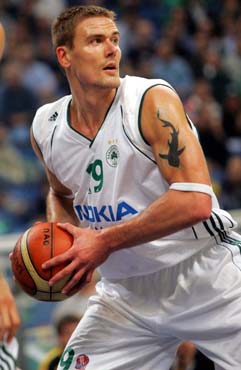 A member of the Lithuanian national team since 2002, Robertas Javtokas is one of the best big men in the competition. A motorcycle crash stalled his career in 2002, but Javtokas has since recovered and reclaimed his dominance. The 6-foot-11 center scored 10 points and pulled down six rebounds in an exhibition against Team USA on Aug. 21, holding his own against the likes of Tyson Chandler and Lamar Odom and even getting the better of them in some instances.