San Antonio Spurs’ forward Tim Duncan isn’t getting any younger. He will enter the new season at age 34 and according to coach Gregg Popovich Duncan got slimmer though Duncan said he actually gained weight at the Spurs’ 2010 media day.

Let’s face it, Duncan is not the same five years ago. While he can still play at a high-level, age and nagging injuries are starting to catch up with him.

Last season he was able to put up 17.9 points, 10.1 rebounds and 1.5 blocks per game, shot 51.8% from the floor while averaging a career low 31.3 minutes per ball game. Limiting Duncan’s minutes during the regular season is nothing new. The Spurs have 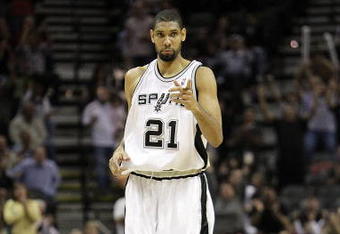 monitored his playing time during the 2003-2004 season and have been slowly decreasing his minutes year after year in an effort to keep him fresh and healthy by the time the playoffs come around.

This strategy seemed to have worked as the Spurs were able to squeeze in two more NBA titles while giving Duncan less work-load during the regular season. However, last year the trick appeared to back fire. The Spurs saw themselves battling for playoff position in late March and opened the post season on the road for the first time since the 1997-1998 season.

That is not to say limiting Duncan’s minutes is a bad idea.

Last season was one of the toughest in San Antonio. They have to overcome some chemistry issues, inconsistency and a bad stretch just to make it to the playoffs. Unlike in previous years (when the team had secured a playoff spot early), the Spurs never had the luxury of sitting out their stars for the last couple of games to get some breather as the post season approaches.

In short, while averaging less playing time last season, Duncan really never got the ‘rest’ he normally had. Now, with a healthy ‘Big Three’, a couple players entering their second year as a Spur, an overdue help from Brazil and some additional rotation players, the Spurs look better than a year ago.

The front court rotation in particular looks deeper which will be good for both the Spurs and Duncan. The development of DeJuan Blair and Tiago Splitter’s transition into the NBA will play a huge part in giving Duncan more rest.

Nevertheless, Duncan made it clear he wants to play and he’s ready. He even mentioned recently he wants to play for the Spurs “until the wheels fall off”. But in saying this, he is fully aware it’s the teams best interest to keep him fresher when the playoffs comes around.

Giving Duncan more rest this coming season should be one of the teams’ top priorities. He is still one of the games’ best when the stakes are high and his leadership will be needed even more during the post season.

Granted Duncan did take the summer off but you have to question what can be done to give him the needed rest? Perhaps they can start by winning early and often during the regular season and give his aching knees the night off during the second game on back-to-backs.