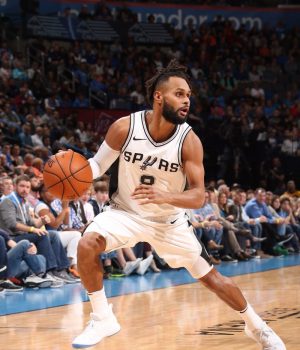 Despite being shorthanded, the San Antonio Spurs put up a fight, but ultimately fall 90-87 to the Oklahoma City Thunder (10-12) at Chesapeake Energy Arena on Sunday night.

The loss showed off the depth of the Spurs, who trailed by as many as 14 points. San Antonio kept the game close despite being without LaMarcus Aldridge, Kawhi Leonard, Manu Ginobili, and Tony Parker.

Here is what went good and bad for the Spurs, as well as three standout players: Joffrey Lauvergne, Dejounte Murray, and Davis Bertans.

Dejounte Murray: With Tony Parker out for the Spurs on Sunday, Dejounte Murray got the start. He had a great start to the season, but his play had dropped off recently. Sunday night, he showed flashes of just how good he can be once he has a few more years under his belt. Murray posted a double-double with 17 points and 11 rebounds in 39 minutes.

What made Murray’s play standout is his signature will to attack at no costs. The second year point guard showed no fear going up against an experienced guard like Russell Westbrook. Murray constantly drove to the rim, drew contact, and created fouls.

Joffrey Lauvergne: After he went down with a high ankle sprain, Joffrey Lauvergne has not had much time on the court since returning from injury. However, he took full advantage of his playing time on Sunday. Lauvergne finished with a season-high 12 points to go along with six rebounds.

Lauvergne’s passing ability was on full display as he had two pretty assists to Anderson and Murray in the paint. He also showed off he is not just a tough and rough guy in the paint, he also had his jump shot working as he went 5-of-8 from the floor. Lauvergne’s play will likely see Pop start to give him more time on the floor as the season goes on.

Davis Bertans: Like Lauvergne, Davis Bertans has not had much playing time to start off the season. On Sunday, he showed just how dangerous he can be if given the opportunity. Bertans finished with 16 points on 4-of-9 shooting from three point range and five blocks. Per the Spurs, Bertans is just the second player in Spurs history to have 4-plus three-pointers and 5-plus blocks in a game. Danny Green did it in 2014 against the Memphis Grizzlies.

If Bertans, Lauvergne, and Murray can start to play consistently, it will only make the Spurs dangerous once they are fully healthy.

Up next: The Spurs are now 15-8 on the season and will return to the court tomorrow night when they welcome the Detroit Pistons to the AT&T Center at 7:30 p.m.