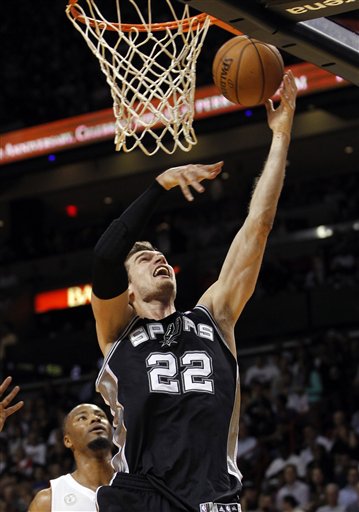 That was the San Antonio Spurs’ starting five on Thursday as the Spurs’ reserves almost pulled an upset in Miami in falling short to the Heat in the final two minutes 105-100.

Where were the Spurs’ stars Tim Duncan, Tony Parker, and Manu Ginobili? The “Big three” along with Danny Green were sent back to Texas before the game even tipped off and the media turned the pregame conversation into a huge debate about whether it was right for head coach Gregg Popovich to rest his players on a National TV game night. Though Popovich has made similar decisions in the past, Thursday’s decision became an issue with NBA commissioner David Stern as he issued a statement stating the Spurs would face consequences for their decision.

Fast forward to the fourth quarter in Miami and the fans were yelling “Let’s go Heat!” as Gary Neal had just connected on a 3-pointer to give the Spurs a 98-93 lead with 2:14 remaining in the game. From that moment, the Heat would outscore the Spurs 12-2 in the final two minutes as the Spurs, though given a valiant effort, just couldn’t come up with the victory against the Heat.

Though it is still a loss, there were some major positives in the game for the Spurs’ reserves. With just nine players playing, five of them ended the game in double figures while still putting 100 points on the scoreboard, and even turning in a 32-point third quarter.

Gary Neal was the leader of the pact with 20 points, four rebounds, and seven assists, but with him having to be the main playmaker for the Spurs, he turned the ball over six times. Tiago Splitter (18 points, 9 rebounds, 1 block) held his own against the smaller Heat frontline, while Nando De Colo set a season high with 15 points, six rebounds, five assists, and one steal, but even the rookie learned that playing heavy minutes puts more responsibility as he turned the ball over five times in the game.

Boris Diaw chipped in 12 points and six rebounds, while also having to defend LeBron James (23 points) for the majority of the game. Taking the place of Duncan’s routine double-double was Bonner with 10 points and 10 rebounds, while James Anderson scored nine points off the bench.

One reason the Spurs were able to stay with the Heat and even hold a lead for the majority of the second half was their 3-point shooting, as they connected on 10-of-31 three’s on the night. Turnovers however were the demise for the “starless” team as they turned the ball over 20 times and the Heat scored 19 points off the turnovers.

With the loss, the Spurs ended their six-game East Coast road trip with a 5-1 finish. The team is now 13-4 on the season as they’ll host the leaders of the Western Conference, the Memphis Grizzlies (11-2) on Saturday.

The Spurs will return to the city of San Antonio, but the following days will be interesting as the NBA decides how it will handle Popovich’s decision to rest his players on a marquee game night.