The San Antonio Spurs look to snap their two-game losing streak tonight as they face the Indiana Pacers in Indiana. This will be the last game of their mini road-trip which has not been kind. So far they are 0-2 with losses to the New York Knicks and Boston Celtics.

To talk about tonight’s matchup, I turn to friend of Project Spurs, Jared Wade of Eight Points Nine Seconds which is a fantastic website you have to visit for all things Pacers. He also writes for Both Teams Played Hard and Hardwood Paroxysm.

In this Q&A Jared talks about the Pacers’ additions of Darren Collison and James Posey, rookie Paul George, the Pacers’ strategy heading into tonight’s contest and more.

Jeff: Over the off season the Pacers picked up Darren Collison and James Posey. How have they been for Indiana 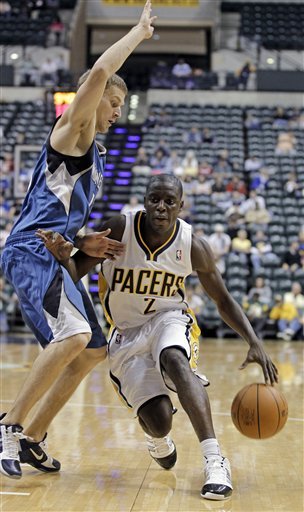 so far this season?

Jared: I have been trying to see the brighter side for a while, but we’re well into January now so I think calling Collison anything other than disappointing would be an overly rosy assessment. He has only two 20-point games (with the second finally coming earlier this week) and zero games of even 8 assists. He is still struggling to learn the offense, which is understandable to a degree, but you would think that would spur him to at least occasionally freelance somewhat and be productive by just playing basketball. He is indeed aggressive at times and has stretches of high-level play. But there has been more mediocre play — and rather bad defense — than anything else.

Posey has been slightly better than expected. I thought he was just a bloated contract that would contribute nothing. But he has hit some big threes during crucial times, giving the Pacers momentum and the confidence that can come when a two-time champion shows the young guys what stepping up is about. He has played decent defense as well. Still, he is probably getting too many minutes. Most fans believe so at least.

Aside from dunking the ball over 7-2 teammate Roy Hibbert in practice, how would you assess rookie Paul George. Likes? Dislikes?

He hasn’t played much. His athleticism is always on display and he seems to have good instincts about where to be and what to do on the floor. Like most raw rookies, however, he just thinks too much and is a little lost, trying too hard to remember what he is supposed to be doing assignment-wise vs. just doing what he knows how to do as a basketball player. He’s shown enough that I am still eager about his future though. Can shoot. Can play D. Can finish in transition. Can break a guy off the dribble. Could be like Trevor Ariza with more refined fundamental skills.

The Spurs are coming off two tough losses to the Knicks and Celtics. Feel the Pacers might be catching San Antonio at the right time to get a win?

This Spurs team can run or play a half-court game. What should be the strategy for the Pacers heading into tonight’s contest?

They need to execute offensively. It’s a rare sight, and this may sound obvious, but when they do that, they are actually a pretty good team. The defense has held up in almost every game. They really are playing well on that side. So when they can establish Roy Hibbert in the post, get cutters making the defense react and move the ball around to get open shots, they can beat anyone. Thing is, they haven’t done that very many times since November ended.

Which is the better matchup to watch: Collison-Parker or Hibbert-Duncan?

At this point, the “better” matchup will probably be Collison/Parker. Hibbert has just been so bad for so long that I wouldn’t expect much other than Timmy stealing his lunch money and kicking his puppy all night long. In Roy’s defense, he did play fine against the Knicks last Sunday (which was somehow the Pacers last game). But Coach Jim O’Brien, as he does constantly, inserted some really weird lineups in the second half and Roy barely played. Hopefully for Pacers fans, Hibbert will be able to build on his better offense from that game even if it was in limited minutes. Because as we saw earlier this year, Hibbert vs. Duncan can be pretty fun to watch.