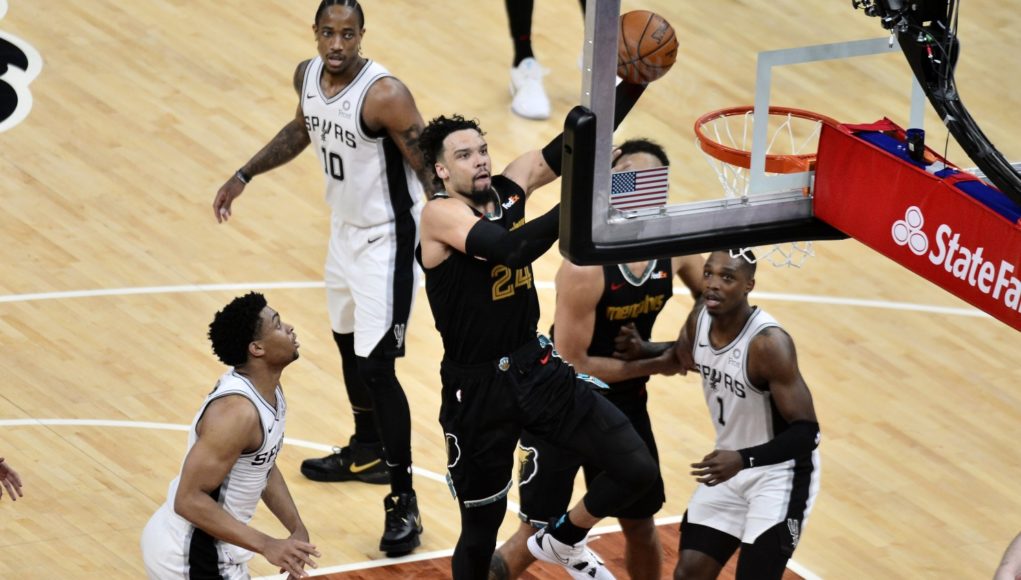 The San Antonio Spurs saw their 2020-21 season come to an end in the same place it began as they fell 100-96 to the Memphis Grizzlies at the FedEx Forum in the first Western Conference play-in game on Wednesday night.

The loss puts an end to another tough season for the Spurs, who will face major questions going into an offseason after failing to make the postseason and have a losing record for the second straight season.

San Antonio struggled to open the game, shooting just 30 percent in the first quarter and trailed by as many as 21 points. The Spurs outscored Memphis 30-18 in the second quarter, including going on a 22-3 run to open the middle frame.

“I don’t think I’ve ever been more proud of a team that doesn’t quit,” Spurs Head Coach Gregg Popovich said of his team’s fight. “No matter what the stakes are, what the circumstances are, they really fight and that’s a good base.”

The Spurs struggled to contain Dillon Brooks and Jonas Valanciunas, who torched the Silver and Black early and often. Brooks scored eight of her 24 points in the fourth quarter, while Valanciunas posted a season-high 23 rebounds and 23 points for Memphis.

San Antonio was led by both DeMar DeRozan and Rudy Gay, who both had 20 points on the night. Keldon Johnson added 11 while Jakob Poeltl posted 10 points and 10 rebounds in the loss.

Ja Morant added 20 points and six assists and Jaren Jackson Jr. had 10 points in his first game against the Spurs this season.

Here are three main takeaways from the Spurs’ loss on Wednesday:

If Wednesday night was DeMar DeRozan’s last game in a Spurs jersey, it did not do his time in San Antonio justice. DeRozan struggled to find his shot against the tough defense of Brooks, shooting just 5-for-21 to score 20 points.

DeRozan’s stinker did not do what could be his final game in the Alamo City justice. Countless times he has carried the Spurs to win games they had no business winning and his average of 21.6 points per game lead the team for two seasons running.

He played very well with the Spurs’ young core and seemed to gel quickly with Dejounte Murray and Derrick White on and off the court. If DeRozan does walk and go to another team, his loss will be felt.

The Spurs will look back at Wednesday’s game and want to burn it. The club shot just 1-for-10 to start the game and 8-for-26 overall in the opening 12 minutes. San Antonio hit just one of their first seven threes in the period.

While they played better in the other three quarters, that first quarter would come back to be their downfall.

“I am really proud of the way they conducted themselves, or play to win even though we got manhandled in that first quarter,” Popovich said.

That could all come down to fatigue from the grueling second half of the season or just inexperience from the team as some of the young core had never seen an NBA Playoff-type game before.

Either way, this will be a learning experience for the group going beyond this season.

Getting into the play-in game may not seem like a big accomplishment but for this year’s Spurs team, it was major for their confidence and a building block for bigger and better things to come.

Guys like Johnson, Lonnie Walker IV, Murray, and others will benefit from games like this and Popovich sees massive potential moving forward for the group.

“They like each other,” he said. “They enjoy each other off the court, they root for each other. That’s been a huge plus for the group as they grow. That will aid them immensely as a team.”