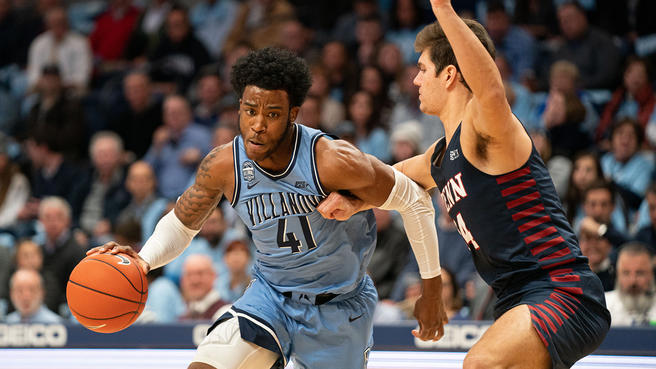 The realization has inevitably set in for Sab Antonio Spurs fans now. This team is not very good and they will get a draft pick that reflects that.

While the Spurs are likely picking in the lottery, they do have a second round pick that needs to be considered as well. A good candidate for that pick would be Villanova’s Saddiq Bey.

The 6-foot-8, 216-pound sophomore has made an enormous leap in his progress from his freshman year. Despite attempting about five more shots a game, his shooting percentages are still going up. He’s an athletic and skilled forward — as is the case with many Villanova forwards who come out of the program — who could be a nice sleeper in the NBA Draft.

Here are some of his stats so far this season:

Bey is an excellent shooter as you can see by his percentages on almost 12 shots a game. He boards the ball well and can rack up the assists if called upon to do so. He has great basketball IQ — another Villanova by-product — which hasn’t always shown on defense, but he should be able to pick it up at the next level.

While the sophomore doesn’t have elite bounce or run in his game, that may not matter as a spacer at the next level.

He can definitely give the Spurs the much needed elite shooting that they lack right now. He is a decent driver right now with potential to tighten his handle and become even better.

The Wildcat can post up smaller guys and is great off the ball. He moves well within the offense and is an unselfish player to boot.

While he lacks an elite first step off the dribble, he does score well off the dribble with other moves. His defensive lapses will have to get fixed, but that should not be an issue with a professional coaching staff on his side.

Bey is currently hovering around the later part of the first round and early second round. However, if he continues to play as well as he has then you can expect him to raise up the mock draft boards.