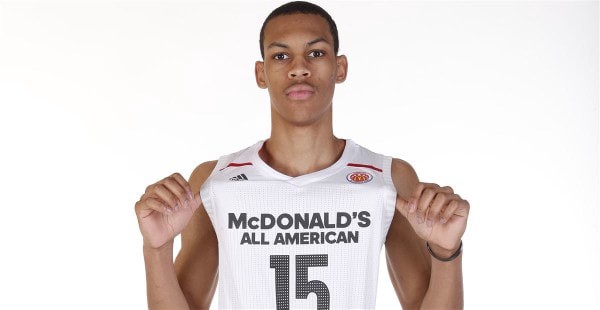 The NBA Draft is but two days away and so we have one last San Antonio Spurs prospect to watch in Darius Bazley. His name might not be one a lot of people are familiar with since he did not actually end up playing college ball. He was committed to Syracuse and then pivoted to play in the G-League, but ended up taking a paid internship with New Balance (hello, Matt Bonner shoutout). So no one has seen him play in a competitive environment for a year now.

It is going to be hard to gauge exactly what he will be able to do, but his performance at the NBA Combine certainly helped. The 6-foot-9, 208-pound forward held his own despite his slight frame and got going once he got used to the speed of the game. For the two games he played in, he scored 18 points on 8-13 shooting with one of those shots being a triple.

There are no stats to throw in here since Bazley did not play in college, but he should have the defensive versatility you like to see in today’s wing man. ESPN’s Jonathan Givony was high on him and said he looked like a first-round talent in the scrimmages. Some good praise for sure, and deserved after not being able to play against similar competition for a year.

The hope with Bazley is that his length, athleticism, and speed all translate on the defensive end and can be used for switches all over the floor. He is an adequate shooter right now who can consistently hit in the midrange. He will have to prove that he can extend that range to become a worthy pick for the Spurs at 29. If he becomes even a decent shooter, the pick was worth the risk and the team gets a huge win out of it since he is likely going to be a long-term project.

Bazley is a total enigma similar to Dante Exum, albeit to a lesser degree and with less on the line with mock drafts predicting him to go late in the first round or later. He has a lot of the physical tools you like to see for a wing man, but it remains to be seen just how good or bad his jump shot is right now. We will find out soon enough if he answered those questions in his workouts by where he gets drafted on Thursday.

The former Syracuse commit is hoping he turns out like Mitchell Robinson or Anfernee Simons who both skipped college and entered the NBA Draft last summer. Robinson was taken 36th overall but had a great year with the Knicks. Simons was taken in the first round by Portland and scored 37 points in his first ever start this past season. That wouldn’t be the worst company to be in for this draft.