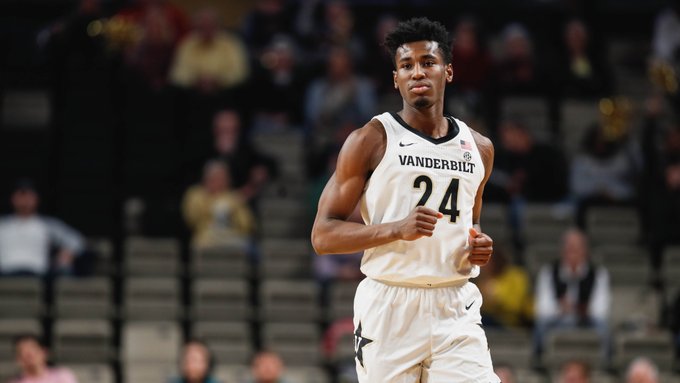 The San Antonio Spurs continue their up-and-down season, seemingly unable to break out of the middle of the pack. They have been teetering in the 14-16 pick range and with that, this week’s prospect to watch is Aaron Nesmith. The Vanderbilt sophomore is a potential “3-and-D” player that has been highly efficient so far.

Nesmith is a 6-foot-6, 213-pound wingman who is an absolute deadeye shooter. Despite being the biggest offensive threat this horrible Vanderbilt team has, he finds ways to get open and get his shot. Here are some of his stats for the season:

Nesmith improved his scoring by 12 points a game from his freshman campaign and some of the credit can go to new coach Jerry Stackhouse as well as Nesmith being forced into the role of top scorer. He’s played the role well and has expanded his game in the process. However, he likely won’t play again this season due to a foot injury he suffered this month.

Despite his season being cut short, Nesmith has done more than enough to give us an idea of what he could be at the next level. He moves well off the ball, has some limited driving ability and has gotten better about finishing through contact this season. He will have to get stronger to be able to play on the wing at the NBA level, but that can be fixed in the weight room and in Austin.

The young man has a clear role in the NBA as a shooter and should help the Spurs space the floor. However, he will have to improve his defense. He tends to get caught over pursuing on closeouts and shades too far up as a defender. This leads to easy drives into the paint for ball handlers and scrambles to other players on kickouts.

Having said all of that, Nesmith will have a chance to get picked in the middle of the first round with the perception of this draft class being a weak one. It will come down to what teams are looking for and if they need shooters. The Spurs would certainly fall into that category.