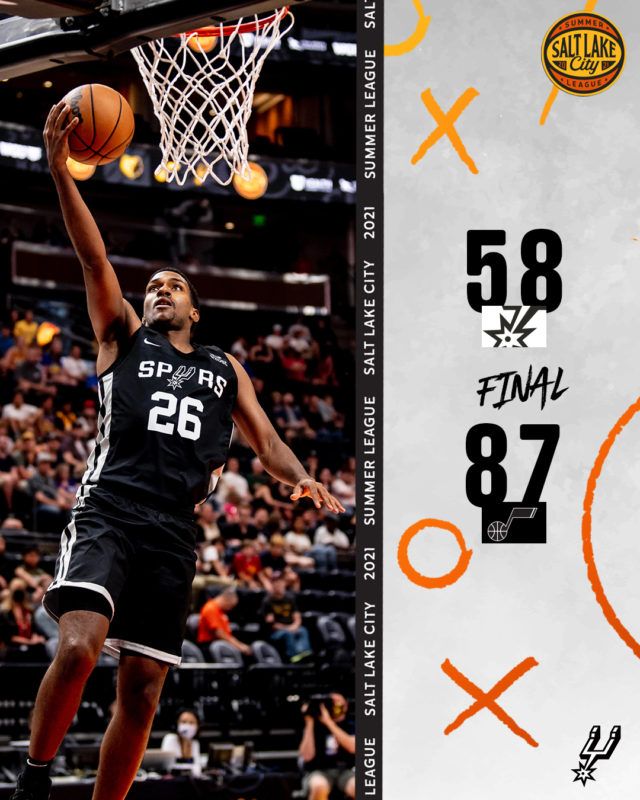 Hardly a sign of things to come, it was still a rough night for the San Antonio Spurs, losing 87-58 to the Utah Jazz White team in Summer League action. The Jazz’s White team has a color designation as the team has two squads playing in the Summer League.

In a game in which a win means very little, the Spurs’ roster looked like a bunch of guys playing together for the first time. That, of course, was largely the case. Only three players who recorded minutes had previously played a game together, and even that was limited to the G League bubble in Orlando last winter.

The Spurs’ first-round selection in last week’s 2021 NBA Draft, Joshua Primo didn’t take the floor, meaning more eyes were on second-round pick Joe Wieskamp than otherwise would’ve been. Wieskamp struggled in his debut for the silver and black, scoring just four points on 2-8 shooting. A perimeter specialist, the rookie out of Iowa couldn’t find his stroke, missing all four attempts from three-point range.

Joe Wieskamp says he was excited to wear the Spurs uniform for the first time and knows he'll get his shots to fall: “I honestly wish I could have hit more shots. I’m excited to play for the next two weeks.”

Undrafted free agent Justin Turner out of Bowling Green State University led the Spurs in scoring, collecting 13 points and seven rebounds while getting the start. Matt Mitchell came off of the bench with 11 points in 19 minutes, shooting 2-3 from deep, shooting 40% from the floor.

As inexperienced as the Spurs team was, the Utah Jazz White team looked seasoned. Led by second-year players Trent Forrest and Udoka Azubuike, the Jazz squad pulled away from a three-point halftime lead to win by 29. Forrest alone scored 28 points, shooting a lights-out 8-11  (72%) while connecting on 2-3 from distance. Dominating inside, Azubuike pulled down 14 rebounds to go along with eight points, using his 6’10” height advantage over a smaller San Antonio roster.

In addition to Primo, Tre Jones, and Devin Vassell, San Antonio’s two picks in 2020, didn’t record any minutes either. There is no word on when they will appear in the Summer League, though they shouldn’t be expected to play serious minutes in Salt Lake City.

The Spurs’ next in Utah is Wednesday, August 4 at 6 p.m. CST when they’ll face the Jazz’s Blue team on NBA TV. Also playing on Tuesday night, the Blue squad fell to the Memphis Grizzlies 104-65.