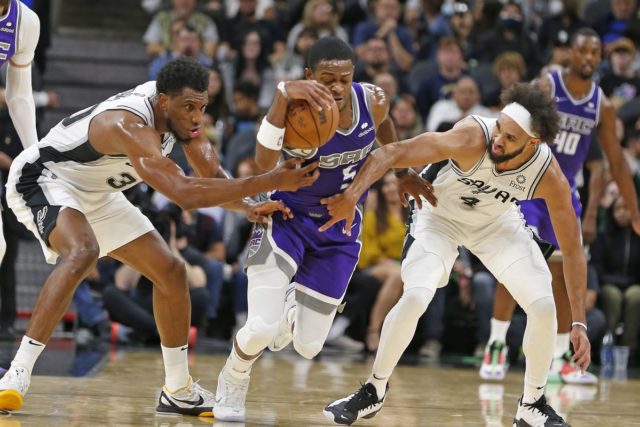 SAN ANTONIO — The San Antonio Spurs returned home on Wednesday night after a quick three-game road trip and easily defeated the Sacramento Kings 136-117 at the AT&T Center thanks to a balanced attack.

The victory snaps a two-game losing streak for San Antonio, who earned their fourth win of the season.

San Antonio played without center Jock Landale, who entered the league’s health and safety protocol, and Keita Bates-Diop, who missed the game with a minor injury.

Here are three standout moments from the Spurs’ win over Sacramento:

San Antonio was led by Dejounte Murray, who finished with 26 points to go along with seven assists and six rebounds. Murray and Sacramento point guard De’Aaron Fox battled it out all night long. While Fox led the Kings with a game-high 37 points, it was Murray’s team who got the win.

11 triples in the first half for the Spurs 🔥 pic.twitter.com/VFZO01uAFl

Murray has been on a tear as of late for the Spurs, averaging 18.4 points per game and 8.2 assists per game so far this season.

“He hasn’t just had a stretch, he’s had a great season so far,” Spurs Head Coach Gregg Popovich said. “He’s getting stats and all that sort of thing, but his decision-making and his leadership have been outstanding. That’s what I like most.”

Rebounding from a dud

The Spurs rebounded from a poor shooting night in Oklahoma City on Sunday, scoring a season-high 136 points in Wednesday’s win. The Spurs raced out to a 14-point lead in the first quarter and never would trail in the game.

After not being able to hit from distance, the Spurs hit 11 three-pointers in the first half and finished 18-for-32 for the game. Doug McDermott went 4-for-6 from distance while Devin Vassell hit five of his seven three-point attempts.

“When we got up today, it did feel great to be able to maintain that, play good D, rebound, make good decisions on offense, do it as a team, not go off one on one, that sort of thing. That was the best part of the game,” Popovich said.

The Spurs have had a history of blowing games in the third quarter but that was not the case on Wednesday. As expected, the Kings came out strong in the second half but the San Antonio Spurs were up for the challenge, winning the quarter 37-34.

San Antonio followed that up with a 32-point fourth quarter. Eventually, Popovich put in the bench with Joe Wieskamp making his NBA debut and fan-favorite Josh Primo seeing the floor.

“Just keep our foot on the gas pedal,” Spurs center Drew Eubanks said of the Spurs’ third quarter. “We’ve been there, done that a couple of times already, where we get big leads, start out really well and then we lose. So it was a point of emphasis for us to keep it going, stick to what we do.”

The San Antonio Spurs are now 4-7 on the season and will return to the court on Friday night to welcome Luka Doncic and the Dallas Mavericks to the AT&T Center at 7:30 p.m.