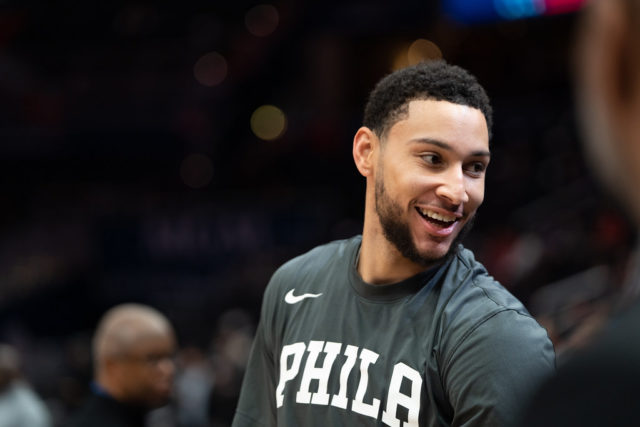 The chase to sign faltering Philadelphia 76ers point-forward Ben Simmons continues to build and according to many sources San Antonio Spurs are now considered one of the viable frontrunners in the race.

To be clear, from the outset, it’s a move that doesn’t exactly excite Spurs’ fans and given Simmons’ end of season form that’s not too surprising. The trade to bring in Simmon to the AT&T Center is one that would, in theory, see Dejounte Murray and/or Derrick White moving in the other direction, and more besides.

Simmons is clearly a player with something of a pedigree, the 24-year-old has made the NBA All-Star game three years running but his ignominious display in Philadelphia’s 4-3 series defeat to the Atlanta Hawks plays heavy on the memory right now.

The current betting on where Simmons may end up shows the Spurs as third favorites, at +400, with the Portland Trailblazers leading the sportsbook odds at +200 and the Washington Wizards close behind at +300.

No doubt the betting on San Antonio will significantly shift ahead of next season’s NBA tip-off and when it comes to making the most of the best NBA bets today you’ll find that sidelines.io offers a great deal of expert information to help you succeed in your sports betting endeavors.

It’s fair to say that Simmons has taken the lion’s share of the blame for the 76ers bowing out to the Hawks, and perhaps it’s not a fair assessment of either his season and what the Australian born star is capable of.

In the meantime San Antonio has bigger problems than one that Simmons’ arrival could resolve.

Since then things haven’t been all that peachy and back to back losing seasons, the first time that’s happened to San Antonio since the late 80s, and significant changes could be needed to get them back on track.

Ben Simmons is a better player than recent press give him credit for and the fact that so many sides are clamoring to capture him is clearly a sign of that.

He’s unlikely to feature for Australia in the upcoming Olympics and that will give him to rest and refocus for next season and that will provide a significant boost to whichever team’s jersey he pulls on come October.

Simmons has been brave enough to admit he was at his best during the postseason, stating;

“I ain’t shoot well from the line this series,” Simmons said following Game 7 on Sunday night. “Offensively, I wasn’t there. I didn’t do enough for my teammates. … There’s a lot of things that I need to work on.”

Meanwhile the NBA season is coming towards it’s exciting conclusion with the Conference finals taking place. The Atlanta Hawks, fresh from their victory over the 76ers, taking on the Milwaukee Bucks, with Giannis Antetokoumpo sure to have a big say in proceedings.

In the Western Conference the Phoenix Suns have got off to a great start with opening wins against the LA Clippers.