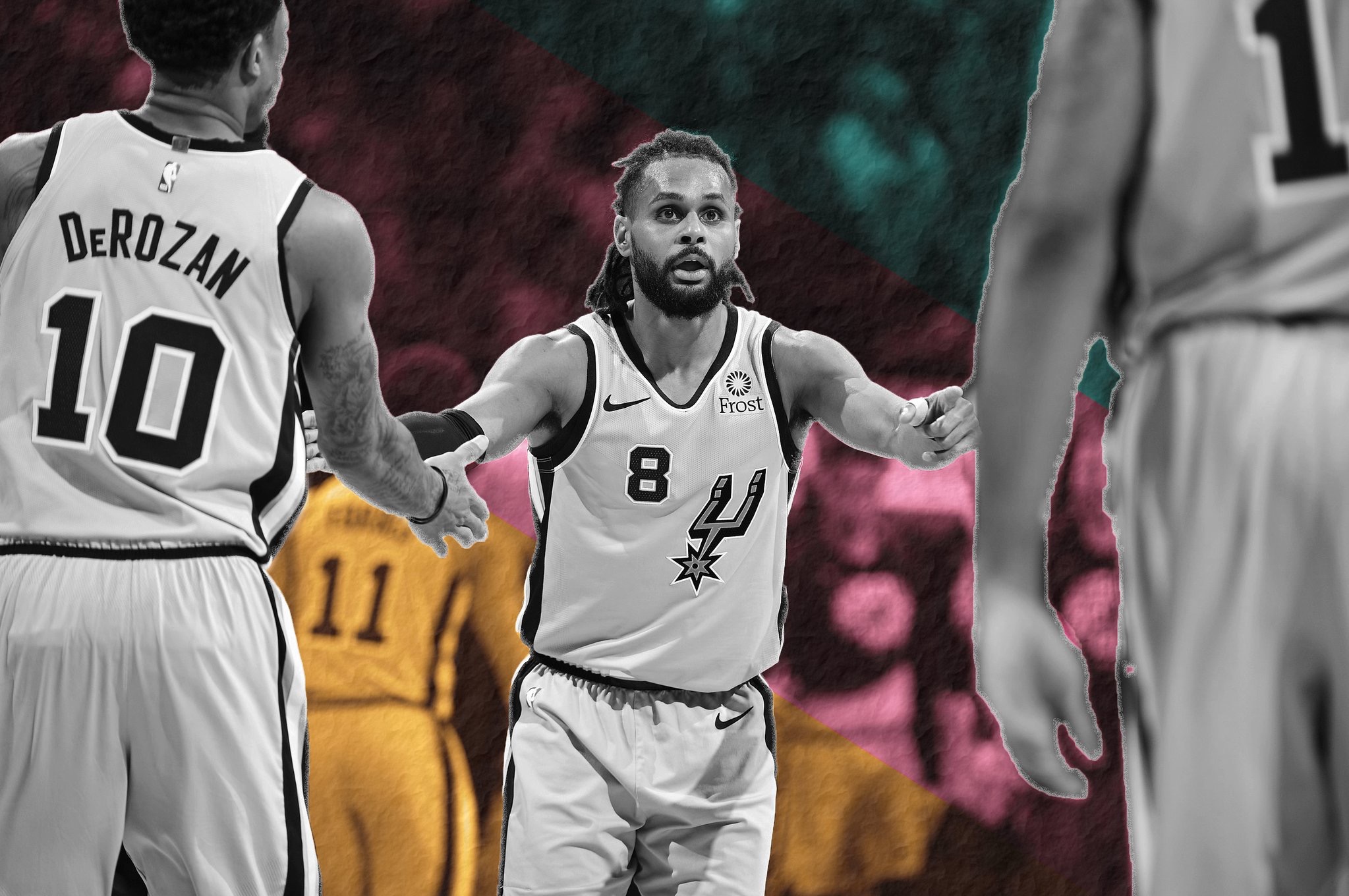 The San Antonio Spurs’ 2018-2019 campaign was officially ended a week ago at the hands of the surging Denver Nuggets. The Silver and Black put up a resilient fight, but they came up just short in game seven of their first-round series.

Although the playoffs are still in full swing for eight championship hopefuls, the Silver and Black should look ahead towards the impending offseason. Summer will be full of important decisions, and making the right choices could be the difference between competing for titles or being stuck in the limbo of mediocrity for years to come.

Every team has goals they want to reach before the start of next season, but not every box will get checked. With that in mind, what does an ideal Alamo City Summer look like?

Well, it starts with the future faces of the franchise and trickles down to the rest of the roster. After all, what is a team without young stars to carry the torch?

Speaking of young stars, getting Dejounte Murray back to pre-injury form should be the first matter of business in San Antonio. The Spurs struggled mightily to stop their opponents from scoring without their 2nd team All-NBA defender, and they sorely missed his contributions on the other end as well.

Though the former Washington Huskie wasn’t an especially dangerous scorer in his first two seasons, he looked poised for a breakout year on offense before he tore his right ACL in preseason play. Between his refined three-point jumper and an improved frame, fans should be excited to see what a healthy Dejounte Murray can bring to the lineup.

The San Antonio faithful got a taste of Derrick White while Murray was away nursing his injury, and it looks like the Spurs found another late first-round gem. He attacked the rim like Tony, read the floor like Ginobili and locked down like Bowen.

It’s safe to say the second-year combo guard earned significant minutes going forward. The only problem is figuring out how to allocate those minutes with plenty of able bodies in place, and three draft picks on the way.

Murray will surely reprise his role as the starting point guard upon his return, and DeMar DeRozan isn’t losing his spot in the rotation any time soon. So, what are the Spurs to do with White? Is it back to the bench or can they slide him elsewhere to make everything work?

The truth is it really shouldn’t matter where White plays as long as he sees steady minutes. While he could probably start alongside Murray and DeRozan in a small-ball lineup, White would be most useful as the heart and soul of the second unit.

It would be a ‘Manuesque’ sacrifice that could positively impact all parties involved. Not only would it allow the Spurs to stagger minutes to ensure an elite perimeter defender is on the court at all times, but White would have the added benefit of kicking off every game against backups and role players.

Fortunately for San Antonio, White is as versatile as they come and he should mesh seamlessly wherever Head Coach Gregg Popovich sees fit. Whether they need a floor general, off-ball shooter or an undersized forward, Derrick is more than capable of manning multiple positions.

Everything said about White can be applied to Lonnie Walker IV. The rookie didn’t find many opportunities in the NBA last season, but don’t mistake his lack of play for a lack of ability.

Walker has a fluid shooting stroke, can score on all three levels, and possesses the physical traits to become an All-NBA stopper. Pop seldom gives first-year players a chance to shine, and Lonnie was no different.

Lonnie Walker IV with the steal and layup for the @spurs!#NBASummer pic.twitter.com/SUhsOWaZM9

The University of Miami product spent the majority of his first go-round developing in the G-Leauge. However, he shouldn’t expect to spend much time in Austin next year.

Lonnie is NBA ready right now, and he deserves a chance to play a significant part in what San Antonio does next season. If that wasn’t already apparent, it will be by the time he dominates his 2019 Summer League competition.

An increased role for Walker will mean a decrease in minutes for others across the rotation. It’s time for the Spurs to move on from a handful of players, and the emergence of Lonnie Walker IV should make for a smooth transition.

Let’s discuss San Antonio’s in-house free agents before we get into any potential signings or trade chatter. The Silver and Black have six players set to hit the open market, but not everyone can return if the Spurs want to contend.

Though Quincy Pondexter, Dante Cunningham, and Donatas Motiejunas made for decent insurance policies, they shouldn’t be in a Spurs jersey next season.

Re-signing Rudy Gay should be a priority, and Coach Pop has made it known he desires to retain the services of the 13-year veteran. Gay took a huge step in improving his efficiency and provided a major spark for an offense that struggled at times to get going.

San Antonio would be wise to steer clear of a lengthy contract for an aging star; just look at what happened with Pau Gasol. Instead, using their Early Bird Rights to negotiate a two-year contract within the ballpark of $20M seems like a reasonable alternative.

As for Drew Eubanks and Ben Moore, because of the nature of two-way contracts, they aren’t exactly in the same boat as the aforementioned free agents. While both guys were important contributors to San Antonio’s G-Leauge affiliate, only Eubanks showed a semblance of legitimate NBA potential.

Drew Eubanks gets HIGH above the rim for this monster block!#GoSpursGo | @spurs pic.twitter.com/ParYOFbYb4

Considering each team is only allowed a single pair of two-way contracts per season, Moore becomes the obvious roster casualty. The Spurs have three picks in the 2019 draft, and the remaining two-way contract would be better-served fielding their second-round selection.

Shoring up the Roster

Despite the fact San Antonio has the opportunity to add a plethora of fresh talent, it may make more sense for them to pursue a trade or two in the hopes of improving the roster and freeing up some minutes for their young core.

Marco Belinelli and Patty Mills were a part of the Spurs’ last title team in 2014, and both guards are fan favorites throughout the city of San Antonio. There’s no denying they contributed something special to the team over the years, but recently in the playoffs, they both struggled on each end of the court.

Belinelli and Mills are aging shooters with decreasing value, declining athleticism, and a penchant for giving up easy baskets. Patty is owed a grand total of $26.6M over the next two seasons, Marco might still be attractive to contenders in need of shooters, and the Silver and Black should try to unload their contracts.

Of course, getting a deal completed is easier said than done in the NBA. Regardless of real-life obstacles, here are a few scenarios help all teams involved.

Should the first and last trades listed above get the green light, that would leave San Antonio with the 19th pick in the 2019 Draft, three NBA roster openings, and they’d still be an over the cap team able to re-sign Gay. Keep in mind though, the fourth trade proposal would need to be executed before July 1.

They wouldn’t have enough money to sign a big-time superstar, and the home of the River Walk has never been a major free agent destination. Nonetheless, players around the league are bound to be attracted to the idea of playing for Coach Pop before he calls it quits.

Thaddeus Young is one such player who fits the mold of a perfect Spur. Young is a selfless teammate, eager defender, and a serviceable catch-and-shoot threat.

Other teams in the association will almost definitely be able to offer Thaddeus more money. The Spurs, however, can offer Young a place to contend and a Mid-Level Exception worth up to $39.8M over four years.

Do I expect Young to sign with San Antonio? Not really. Even if he does, it’s doubtful the Silver and Black offer him more than a two-year stint.

A more realistic target would be the Spurs’ 2015 first-rounder Nikola Milutinov. The 24-year old put himself in the EuroLeague MVP discussion this season and a buyout would be relatively inexpensive.

Putting a price tag on the Serbian center isn’t a precise science. Even so, you can use an estimation of Tiago Splitter’s first NBA contract to get an idea of his price range.

On the topic of players heading into their first contracts, assuming they hold on to a lone first-round pick, the Spurs must make a smart draft day decision. The talent will be there at 19, but a poor evaluation could lead to wasted potential.

Romeo Langford is the guy San Antonio should be eyeballing, and he should be available. Much like Lonnie Walker IV from last year’s draft, Romeo is a natural scorer with insane measurables and freakish physical tools.

Langford could be an outstanding 3-and-D wing despite wonky shot mechanics and an inconsistent motor. He’ll likely need a dedicated coaching staff and a team-first culture to reach his ceiling. Luckily for him, the Spurs have both.

If San Antonio decides to hold their picks in favor of keeping Patty and Marco around, expect the Spurs to invest in some more do-it-all type of individuals.

The Spurs are rumored to be interested in taking international prospect Luka Samanic with their 29th pick, and UCF shooting guard Aubrey Dawkins has NBA pedigree and two-way upside. In fact, once upon a time, San Antonio drafted his father with the 10th pick of the 1986 Draft.

Fantasizing about draft picks and free agents is great, but at the end of the day, the Spurs’ success will be determined by the players who call San Antonio home.

LaMarcus Aldridge, DeRozan, and Jakob Poeltl are the starters right now and for the foreseeable future. Each of them is flawed and none of them are suspected to be on the move this offseason.

From that perspective, the Spurs’ best bet at building upon their success is making minor adjustments to their key players’ weaknesses.

Poeltl was a beast on the boards once the Spurs released Pau and Pop set him free. He banged bodies down low with the league’s best big men and used his soft hands to finish at the rim.

Although he helped San Antonio raise their winning percentage late in the year, Poeltl was far from the reason for their league-best free throw percentage. Jakob shot just 53.3% from the charity stripe in 2018-2019, and that mark kept him from being a reliable player down the stretch in tight games.

Poeltl has all Summer to sharpen his skills at the line. He may never become a serious threat outside of five feet, but knocking down his free throws at a 65% clip isn’t an unrealistic goal.

If working on fundamentals isn’t asking too much of Poeltl, then neither is asking LA and DeRozan to develop an adequate stand-still three-point jumper. The All-Star duo were a pitiful 17-of-87 (19.5%) from long distance during the regular season, and that just won’t fly in today’s pace and space era of basketball.

Although things rarely go according to plan in professional sports, the Spurs and their staff have the power to make the most of their resources. We’ve seen Coach Pop and General Manager R.C. Buford engineer a dynasty from scratch before. Who’s to say they can’t do it again?