The data from the box score comes from NBA.com/stats’ official box scores after each game.

The players who log minutes in the game are listed for each team.

Each player’s point locations are logged and then totaled to the right of the the page. A new wrinkle we’re adding this season is the scoring differential.

This is a new way to see which players made the biggest difference in the scoring department between the the two teams.

After the players section is the shooting stats section. Each stat location where shots were attempted is logged by field goals made, attempted, and field goal percentage. To the right is the points per shot. The idea is a team is efficient when they’re scoring over a point per shot from the location. Also to the right is both the Spurs and their opponents’ percentage of shots. This is displaying where are the Spurs and their opponents’ shots are coming from most to least often.

Finally toward the bottom of the page is a section tracking the scoring difference between the starters and the bench for each team. To the right of that section is how the Spurs and their opponents are scoring on 2s (two-pointers), 3s (three pointers), and FTs (free throws).

This will usually show the gap of where each team has the biggest advantage in a game or where a team is struggling most from compared to their opponent.

Each section has a plus/minus next to it to show if that area is an advantage or disadvantage for each team. 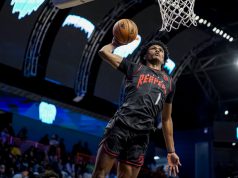 Amen Thompson Prospect Watch: The Answer to the Spurs’ Prayers