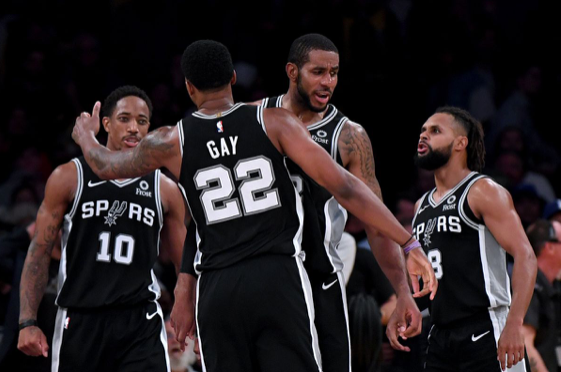 Thursday the San Antonio Spurs will be flying out to Orlando, Florida to begin their resumed season in late July.

Monday, back on the practice court was Spurs forward Rudy Gay. He took some time to speak to the media virtually as the season restart draws closer, addressing a number of topics.

“It’s reality,” said Gay of the chances of catching Covid-19 while being around others. “This is why it’s so bad in America, because it can affect anybody at any time.”

Gay discussed how usually during the summer he takes his son to Disney World, but the whole family won’t be going this time, just him in the secure ‘bubble’ environment.

When asked what souvenir he’ll try to bring back for his son, Gay said, “a healthy father, hopefully.”

“George Floyd’s death was the tipping point,” said Gay of the NBA players continuing to address social injustice while in Orlando, “you put a man’s death on tape.”

“I haven’t been around all my teammates yet,” said Gay of not seeing the whole team since the season shutdown began in March. The whole Spurs team will be together later this week for the first time when they fly to Orlando.

Like his teammate DeMar DeRozan last week, Gay says the team focus will be on trying to earn a playoff spot. Knowing they have only a limited number of games to achieve that goal, Gay sees it as motivation.

“When you tell us there’s eight games to play, you just give it your all,” said Gay.