The artist Lil Wayne wrote the lyrics, “OK, you want me up in the cage, then I’ll come out in beast mode.” 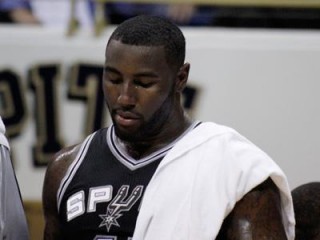 For much of the 10-11’ San Antonio Spurs season, these lyrics would fuel me to tweet, “DeJuan Blair will come out in BEAST MODE.” after Blair would finish a rim shaking dunk or spectacular put back.

Here’s the thing, I haven’t tweeted that since March.

Blair began the season as the starting center and was benched (for Antonio McDyess) after the All-Star break as the team went with a defensive mind set. From that point on, it seemed that Blair’s production began to decline. The real impact showed when he was never brought back into the Memphis series after game four.

What happened to Blair? Why is his coach talking about his maturity more than his play? How can Blair get back into “Beast Mode?”

The Beast from the East

The season began with Blair playing well. Ten games into the season I wrote, “Blair is still killing the boards and really enjoying the transition buckets.”

The beast inside Blair had him playing like a monster on the glass. Whether it was corralling defensive rebounds or grabbing offensive rebounds and putting them back while being fouled for the and-one opportunity. In the fast break, Blair was the perfect trailer for the Spurs’ run-and-gun offense: small, quick and athletic.

One of his best games of the season was on December 28 in a win against the Los Angeles Lakers. Blair finished with 17 points and 15 rebounds.

On February 15, Blair was my “Player of the week” in my Views From the Couch series.

Blair even put on a spectacular show for the entire league as he wowed the crowd in Los Angeles with his spectacular play in the All-Star weekend Rookie-Sophomore game.

Spurs fans and other media outlets were gushing about Blair. In a February game against the Chicago Bulls, Spurs fan @MadCowHeff tweeted, “DeJuan Blair might be able to wrestle a real bull and win”

On March 5, SLAM writer @RussBengtson tweeted “Every time DeJuan Blair gets to a loose ball, an angel loses its ACLs.”

I was even gushing about Blair. On March 23 against the Denver Nuggets, I wrote, “In the first quarter, Blair had a monster dunk. I tweeted “Reports: DeJuan Blair’s put back dunk just started an Avalanche in the Rockies.”

So how did a guy that received so much praise and had so much potential eventually become a non-factor in the most important time of the season?

Out of Beast Mode

Here are Blair’s numbers from the regular season:

Here are his numbers during the playoffs against Memphis:

The numbers are very telling through the season, as you look a bit deeper. Here are his numbers as a starter versus coming off the bench.

In the playoffs, look how Blair’s production began to decline in minutes and production from game one to game four.

Maturity Before Anything Else

After the season, the San Antonio Express News spoke with coach Gregg Popovich on Blair. Coach Pop basically said Blair must work on his maturity before anything else in basketball:

After Blair ballooned to nearly 300 pounds late in the season, Popovich challenged him to shed excess weight. In response, Blair dropped 20 pounds by cutting fast food out of his diet.

Heading into the summer, Popovich has challenged Blair again.

Blair’s future with the Spurs, the coach said, is not aligned with “working on his jumper or developing a jump hook. It’s not defense.”

“It’s personal discipline, responsibility and maturity,” Popovich said. “That will get him to the next level. Short of that, he’ll have a hard time.”

Coming out in Beast Mode

After reading what Popovich had to say on Blair’s future, the issue goes beyond getting better in skill but more maturing into the right mindset. Blair is still young, but for a team looking for it’s fifth championship each season, Blair must understand there is no room for immaturity. Whatever he did to irk Coach Popovich is now Blair’s main focus to fix by becoming a mature athlete and working in the summer to take his game to the next level.

Once Blair is able to resolve whatever off the court issues he may have, it will be time for him to dedicate himself to the gym and weight room. Offensively, Blair will need to improve and develop a consistent 10-15 foot jump shot. With all the pick-and-rolls that the Spurs run in their offense, a big man that has the ability to finish in traffic and make the outside shot is more viable than just solely a slasher.

Should the Spurs continue with the run-and-gun offense, Blair can fit in well as a quick-athletic trailer. He can still compliment the guards in fast break opportunities. On the defensive end, Blair must work on his closeouts of shooters in pick-and-roll situations. He must also work on learning to take charges more often. Since he is a “little big man” as I like to say, he doesn’t have the size to stand underneath and block shots. His body would be used more conveniently in taking charges.

In the playoffs, Marc Gasol and Zach Randolph immediately demanded the ball anytime Blair and Matt Bonner were on the floor. Blair must gain the respect of the other big men around the league by physically preventing them for getting within five feet of the paint.

Blair has an issue that he must solve within himself to deal with the maturity issue that Coach Popovich speaks of. Once he knows he’s ready to be responsible, then he can take his new found identity into the gym to prepare for next season.

Blair is undersized and will be through his career, but he does posses athletic talent to be productive in the NBA. It is his, and only his mission to fulfill in honing in on his potential skill.

Blair must prove all his doubters wrong this summer, “So you can keep knockin’, but won’t knock me down.” said Lil Wayne, “No love lost, no love found.”