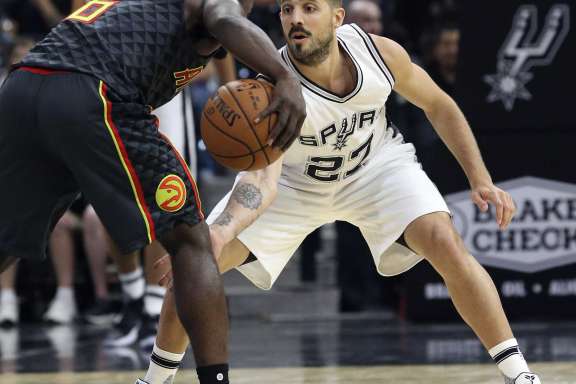 According to ESPN’s Michael Wright, the San Antonio Spurs seem to have made a decision on which of their camp invites to keep on the team. While making that decision, the Spurs also throw in a surprise, as they’re expected to waive a player with guaranteed money.

The two camp invites the team will keep are Argentinean point guard Nicolas Laprovittola and shooting guard Bryn Forbes. Laprovittola played steady minutes throughout the preseason, and his only time he didn’t see the court was in the preseason finale Friday against the Houston Rockets. Forbes put on a shooting display Friday by scoring 19 points in that final two quarters of the game. One might also infer the three-week injury of Danny Green could have played a part as well in the team keeping two of their better 3-point shooters from the camp invites.

Laprovittola’s agent Carlos Prunes also confirmed the news on Twitter that Laprovittola will be staying with the Spurs.

As for the players that will be waived, they are Patricio Garino, Joel Anthony, Ryan Arcidiacono, and Livio Jean-Charles. The last name is surprising because Jean-Charles was on a guaranteed deal worth $2,431,080 for the next two seasons.

The Spurs still have some roster flexibility even though they’ll be capped with 15 players, because Laprovittola and Forbes will only earn $543,471 each this season, but, that money only becomes guaranteed if they are still on the roster past January 10, 2017.

So, though the two players have earned a spot today in October, there’s no guarantee they’ll remain on the squad until after that January deadline.

Wright also reported that the Spurs hope Garino and Jean-Charles sign D-League deals to play with the Austin Spurs, but, even if they do, any NBA team can sign them to a deal this season. Garino has also said he may wait to see if he gets any offers from Europe as well.