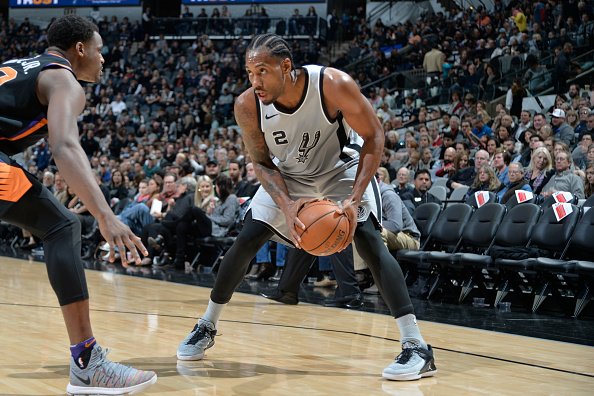 Four days ago San Antonio Spurs forward Kawhi Leonard addressed the media and denied any friction between he and the Spurs, while also saying that he wants to finish his career in San Antonio.

Leonard also mentioned he does intend to play this season.

Saturday, before and after the Spurs’ loss to the Oklahoma City Thunder, there were some mixed messages about whether Leonard will be returning next week when the Spurs host the New Orleans Pelicans on Thursday.

Before the game began, ESPN’s Lisa Salters and Adrian Wojnarowski reported that barring any setbacks, Leonard does intend to play Thursday against the Pelicans.

After the game however, Spurs Head Coach Gregg Popovich had this to say about the ESPN report (via Jeff McDonald of the Express News):

“Well good for them. I’m glad they’re reporting that. I don’t know what they reported. I don’t hear, I don’t worry about reports.”

Leonard has only played in nine games this season since he was listed as out indefinitely on January 17 with the right quadriceps tendinopathy that has been bothering him since the preseason.

After the Spurs’ games at Houston Monday and against the Magic Tuesday, assuming Leonard does return Thursday, he would only have 14 games remaining to get back to a comfortable playing level while also building chemistry with his teammates in the event the Spurs qualified for the playoffs.

Of the teams listed 3-10 in the Western Conference standings who are trying to secure a 3rd through 8th seed, the Spurs have the toughest road ahead. 13 of the Spurs’ final 16 opponents are currently above .500 by record.

If this report does end up being true and Leonard returns Thursday, it could be a sign of hope for a team that has gone 3-10 in their last 13 games and are getting closer by each game to falling out of the playoff picture.