We’ve gone through and redrafted the Spurs picks from 2010 to 2014. Now it’s time to do the same for the rest of the decade. We will start off with 2015 and go up to 2019. And then you can be on the lookout for more redrafts as the weeks go on leading up to the season’s restart.

Nikola Milutinov (pick No. 26) – Milutinov was another draft-and-stash for the Spurs who stayed stashed away. The Spurs actually had a number of guys they could have picked who would have been good power forwards for them. They could have taken Montrezl Harrell, Larry Nance Jr., or Kevon Looney.

I’m personally a fan of Harrell because he’s turned himself into the kind of hard-nosed, hustle man that everyone likes. His work ethic would have been great on this team and he could have found some playing time once Matt Bonner retired after that season.

Cady Lalanne (pick No. 55) – For this pick we once again venture to the undrafted players and one name in particular stands out. Christian Wood would be my replacement pick here, since he has shown he can play at a good level with the Detroit Pistons this past year. He was another guy that needed some time to find his place in the NBA. 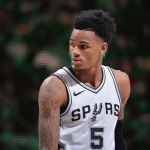 Dejounte Murray (pick No. 29) – I personally wouldn’t want to replace this pick, but for the sake of this exercise I am going to do just that. If we had to replace DJM, a suitable option would have been the Rookie of the Year in Malcolm Brogdon.

Last season with the Bucks he achieved the rare 50-40-90 season. He has also become a much better playmaker in a leading role for the Pacers this season. He would have been a solid defender for the Spurs and someone who can knock down triples. 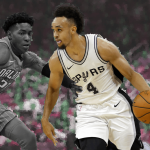 Derrick White (pick No. 29) – While just about everyone loves this pick now, there were some other options on the table at 29. Most notably, the man who got picked after White might have been the better pick for the Spurs.

Josh Hart would start out with the Lakers before getting traded to New Orleans where he has played pretty well this season. He is averaging double-figure scoring and shooting about 34 percent from beyond the arc on a legitimate playoff team.

Jarron Blossomgame (pick no. 59) – The Spurs waived Blossomgame after one season in Austin and he has stayed in the G-League since then. A replacement option for the former Clemson forward might have been Luke Kornet.

Kornet is a big body at 7-foot-2 and he can step out and shoot threes a bit. He would have helped the Spurs space the floor and allow Aldridge to post up as much as he wanted. To be clear, the undrafted guys that year were not an ideal bunch when it came to a decision for a replacement player here. 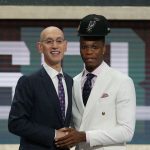 Lonnie Walker IV (pick No. 18) – It is probably still too early to know if this was an ideal pick or not (although it is looking promising). But we are still going to re-draft for the sake of this article. The who came after Walker IV is Kevin Huerter, who would be a good option.

Huerter is a little bigger and while he plays at shooting guard often, he can play at small forward and is a good shooter from beyond the arc. That’s exactly what this Spurs team was missing and he could have probably stepped in right away and contributed.

Chimezie Metu (pick No. 49) – Metu has struggled to see the floor in San Antonio and we are not quite sure why. However, if we are going to replace him, we can do so with an undrafted Duncan Robinson. Not only has he broken out in his second year in Miami, but he has two last names of favorite Spurs players.

His size, three-point shooting and overall shot-making would have excited Spurs fans. He’s already become a folk hero in Miami and he’s undoubtedly just getting started. He’s a classic Spur whose gone under-the-radar his entire career up to now, so you can imagine he would mesh well with some of the other guys on this team. 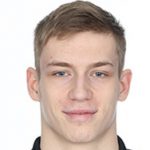 Luka Samanic (pick No. 19) – Samanic already has a lot of fans in San Antonio thanks to what he’s shown off in Austin up to this point. But imagine another player picked here who was still on the board and was one of my personal favorite prospects in Brandon Clarke.

He got off to a hot start in his rookie campaign averaging 12 points and about six rebounds a game. And he’s a major reason the Grizzlies are a likely playoff-bound team.

Keldon Johnson (pick No. 29) – I have always said that I thought KJ was the best value pick in this draft. However, we are going to re-draft him for this exercise and the pick will instead become Bruno Fernando. He gives the Spurs another big body that’s NBA-ready and he’s played pretty well for the Hawks this season.

He becomes part of the youth movement that should help San Antonio move into the future once some of the bigger contracts and older players are off the books. He can hit shots in the mid-range and will hopefully expand that range in the next couple years.

Quinndary Weatherspoon (pick No. 49) – Instead of picking up another guard here, the Spurs will take Jalen McDaniels. He gives them a long defender who can also shoot it outside a little bit. Sure, he’s getting decent minutes on a bad team, but he is making the most of it and his development should be right on track.

*It is clearly too early to tell if these picks panned out or not so this year’s re-draft is purely for fun and my dream scenarios.