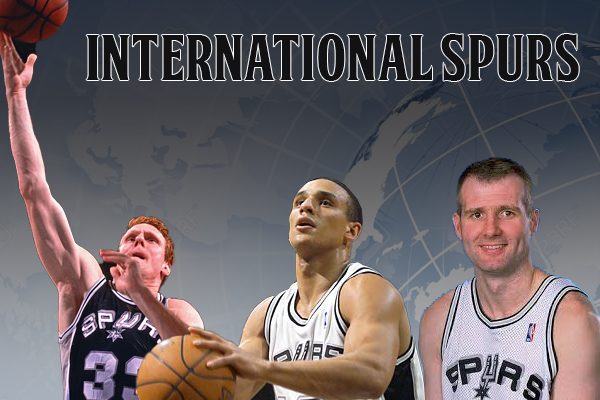 We’re only halfway through the list and we have already seen a handful of guys that were fortunate enough to win NBA championships with the San Antonio Spurs.

The Portland Trail Blazers selected Pétur Guðmundsson in 1981, making him the first Icelander to ever play in the NBA. Standing at 7-2, Guðmundsson had a monster presence but was so-so in the league.

After his rookie season, Pétur returned to international play for three years, playing in Iceland and the U.K. In 1987, the Spurs traded Mychal Thompson for Guðmundsson and Frank Brickowski.

The following season, Guðmundsson was the starting center for the first couple of games in San Antonio, but he suffered an unfortunate knee injury that effectively ended his career with the Spurs.

Cory Joseph was yet another late draft pick that ended up working out for the Spurs. Taken 29th in 2011, the 6-3 point guard was given limited court time in his first couple of years. Given Gregg Popovich’s tendency to underplay new guys, though, that’s not a big surprise.

Joseph filled in as the team’s starting point guard in early 2013 when Tony Parker went down with an injury, starting in nine total games that season. Cory got backup minutes in the playoffs for three consecutive seasons from 2012-15, averaging 2.9 points and 1.0 rebounds per game in 7.3 minutes.

The summer after winning an NBA title with San Antonio, Joseph earned a four-year, $30 million contract with Toronto in 2015. Cory currently plays for the Sacramento Kings.

Aron Baynes didn’t take long to win an NBA title once he joined the Spurs. Signing in January 2013, Baynes spent most of his time on the Austin Toros, although he did start in Game 4 of the first round against the Lakers to try and contain Dwight Howard.

Baynes played a bigger role on the Revenge Tour known as the 2014 season, showing up in 53 regular season games and 14 playoff games. After winning the title with the Spurs, he eventually earned himself a payday with the Detroit Pistons in 2015.

Baynes currently plays for the Phoenix Suns and is averaging career highs in points, rebounds, and assists per game.

If this was a list of likability, Boban Marjanovic would be right up there with Manu Ginobili. The Spurs gave the Serbian giant his first shot in the league, signing him to a one-year deal in 2015.

Playing behind the likes of Tim Duncan, LaMarcus Aldridge, and Matt Bonner, Marjanovic saw just 9.4 minutes per game but made the most of those opportunities.

On a per 36-minute basis, Boban averaged 21 points and 13.7 rebounds and led the team in field-goal percentage with a 60.3 percent clip.

The entire city of San Antonio embraced Boban, but he vastly outplayed his $1.2 million deal and found a deal he deserved in Detroit in 2016.

This is one of those cases where playoff heroics play a bigger factor than statistics. Steve Kerr bookended his time with the Spurs with championship rings, joining the team in 1999 and retiring after their 2003 title season.

Kerr averaged just 8.1 minutes per game throughout his four seasons in San Antonio, but his shining moment in the 2003 playoffs is still one of my personal favorite memories in Spurs history.

Despite not having played a single playoff minute in San Antonio’s first 15 playoff games, Kerr was the catalyst in a furious Spurs comeback in Game 6 of the Western Conference Finals, nailing 4-of-4 shots from downtown.

Kerr’s heroics made sure San Antonio wouldn’t be forced to a deciding Game 7 against a tough Mavericks squad.

While the signing of Trey Lyles was only due to the fact that Marcus Morris had gone back on his word with the Spurs, his presence has been a bright spot this season.

Lyles has grown into his own in San Antonio, improving in several aspects and earning a starting role in the Spurs lineup. The 5.7 rebounds per game Lyles is averaging is a career-high mark for him, as well as his 3-point shooting percentage of 38.7.

Considering Lyles was brought in as a backup plan after the Spurs essentially gave up Davis Bertans for what ended up being nothing, he’s done what he’s needed to do for Gregg Popovich so far.

Unfortunately, appendicitis will be sidelining Lyles for the rest of the Spurs’ season.

The Latvian Laser, Davis Bertans, is definitely one that got away. Many outside of Spurs circles, however, forget that San Antonio only traded the sharpshooter away to create cap space to sign Marcus Morris, who had verbally committed to them.

Bertans was an absolute sniper for the Spurs, shooting 42.9 percent from the outside in his final season with the team. His athleticism was also underrated, however, his defense left little to be desired.

With a .486 percentage (85 of 175), Davis Bertans currently leads the NBA in three-point shooting. 👌#GoSpursGo pic.twitter.com/7AAGnfKJUl

Still, with Davis now having a career year across the board in Washington, it’s hard to ever look at Marcus Morris the same way again after his actions led to the Silver and Black dropping their best 3-point shooter in what’s becoming a 3-point shooter’s league.

In a league that’s increasingly going smaller at all positions, Jakob Poeltl keeps it old school. At 7-foot-1, Poeltl has become the team’s most efficient shot-blocker, swatting shots at a rate of 3.1 per 36 minutes.

Poeltl is easily the most mobile big man on the roster, which is vital when guys like Marco Belinelli and Bryn Forbes are getting blown by on a regular basis.

Jakob Poeltl with the CLUTCH block! 😤

40.9 FPTS for the @spurs big man heading into OT. pic.twitter.com/k1utNdo9vO

We’ve previously done a full breakdown of Poeltl’s growth on the team and made the case that re-signing him should be a goal for the Spurs this offseason, and for good reason.

In July 2003, the Spurs traded away one shooter in Danny Ferry for a younger shooter, Hedo Türkoğlu. The move paid off on the offensive end as Hedo shot 41.9 percent from downtown over the course of his 80 games played.

Türkoğlu played an important role in spacing the floor for The Big Three while also adding a fourth scoring option into the mix. The Turkish forward’s best stretch that season was from February to March when he scored in double figures in 12 straight games.

Hedo had a decent playoffs for the Spurs, but his inability to guard well cost them in a second-round series against the superteam Los Angeles Lakers.

We go from one shot-blocking center to another, as 2005 NBA champion Rasho Nesterović comes in at number 11. The 7-footer from Slovenia started in all 82 games for the 2004 Spurs, averaging 8.7 points, 7.7 rebounds and 2.0 blocks per game.

The following season, Rasho continued being an effective presence inside, averaging 1.7 blocks per game. By the time the playoffs came around, Nazr Mohammed had worked his way into the starting lineup in Rasho’s place, reducing his minutes to just 7.6 minutes per game in the postseason.

Still, the work Nesterović did while paired with Tim Duncan throughout most of the 2005 season helped them secure the much-needed number-one seed that made the difference in the NBA Finals against Detroit.

Coming next week, the top 10 international Spurs of all time will be revealed. In the meantime, you can catch up on numbers 41-31 here and 30-21 here.