To think, after beating the first seed San Antonio Spurs in the first round of the 2011 NBA playoffs, 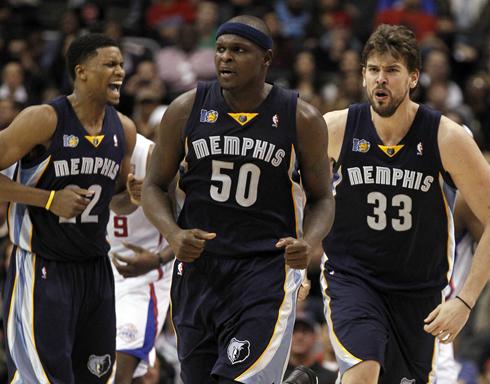 that the Memphis Grizzlies would still be disrespected or fly under-the-radar is ludicrous.

But that is exactly what Grizzlies forward Zach Randolph is claiming, according to the Memphis Commercial-Appeal. While the Grizzlies no longer have the services of Shane Battier, they also have a major “addition” in the return of Rudy Gay, who had to watch his team’s playoff run on the sideline in a jacket and tie.

Gay, along with Randolph and center Marc Gasol form a formidable front court, and likely one of the best in the NBA, albeit not the best, according to Magic Johnson, who picked the Knicks’ improved front court as the best.

“We don’t always get the respect, but we’re tough to deal with,” Randolph said. “Rudy is one of the best small forwards in the game hands down after LeBron (James) and ‘Melo. Me and Marc take pride in rebounding the ball and scoring in the paint. We play off each other pretty good. Teams aren’t going to be able to contain all three of us.”

While I don’t think Gay is a top three or five small forward, Randolph’s point is something the Spurs could certainly validate.

In preparation for the first round series last season, I took a glance at Randolph and Gasol’s performances against the Spurs that season. Well, I’m here to tell you that sometimes stats do lie and the Grizzlies’ post tandem was likely the most difficult the Spurs had faced all season.

Facing that same front court tonight, you can bet the Spurs and the coaching staff will be paying particular attention to that front court, and any team that doesn’t this season is sure to do so afterward.

Respect is earned in the NBA and the Grizzlies play like they did in the playoffs, Randolph won’t have to worry about that disrespect for much longer.