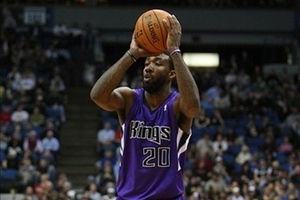 Note: This was written before news broke that the Spurs were close to signing Aron Baynes, maxing out the Spurs roster barring some sort of trade or other transaction.

Earlier this week, reports came out that the San Antonio Spurs may be bringing former Kings forward Donte Greene in for a work out.  Consider this an endorsement of Greene despite the fact that he's been a disappointment his entire career.

To give you a little background, I've lived in Sacramento for the last two years and got to see the bulk of Greene's final two years with the Kings.  The team is a mess, the arena is in shambles and yet, during Greene's time in California's capitol, he didn't let his inconsistent playing time affect his relationship with the city and the fans.  He was the leader of the Kings' Good Squad, the group of bench players that would get the crowd hyped before the opening tip.  He organized The Goon Squad Classic charity basketball game during the 2011 lockout.  He even participated in an engagement video for a buddy of mine to his now wife.  Greene embraced the city of Sacramento at a time when the organization he played for seemed to be doing everything it could to run away from it.  You'd want this guy on your team.

What about on the court?  Well that's much more of a mixed bag.  An athletic 6'10" frame, Greene is more of a wing than a power forward and definitely has a reputation as more of a shooter than anything else.  The truth is Greene can shoot but wasn't a good shooter last season or the season before.  His best season came in 2009-2010 when he averaged 8.5 ppg, 3.1 rpg and close to a block a game in just over 20 minutes of action.  He also shot 37 percent from three that year.  That number dropped significantly to 29 and 24 percent the last two seasons.

Greene's struggles aren't completely his fault.  Sacramento hasn't exactly been known for their ball movement the last few years, so he wasn't getting a ton of open looks when he was playing and wasn't playing enough minutes to find his rhythm anyways, especially last season.  Two years ago, Greene shot 39 percent from the corner 3, a favorite shot of the Spurs system.  He also is a terrific finisher at the rim, converting 67 and 64 percent of his finishes the last two years respectively.  Shots at the rim also accounted for the highest percent of Greene's shots according to NBA Advanced Stats.

Indifferent is probably the best way to describe Greene's defense, but that's more for lack of effort and teaching more than ability.  I think Greene can be a good defender, but he's probably not the shot blocker most fans are looking for, though his athleticism and length suggest he could be a good pick and roll defender.

I think there's room for Greene at the end of the Spurs' bench, especially as a stretch power forward.  Sign him to a two year deal for low money and work him in to the system for the end of this season and next.  Also, see below for a hint of Greene's athleticism and ability to finish around the rim.