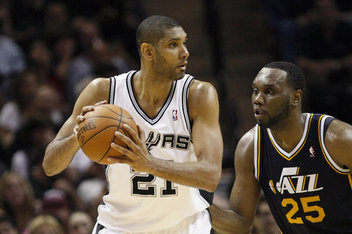 Green paced the Spurs with 21 points, going 3-3 from the three-point line, 8-9 from the field, three assists and one steal in 32:30 minutes. The Jazz were led by Mo Williams who scored a game-high 29 points in 38:32 minutes.

Here is a quarter-by-quarter recap of tonight's Spurs' win.

Spurs Stat Leader – Danny Green with 10 points, shooting 4-4 from the field, and 2-2 from the three-point line.

Recap – It was an inside-out game with Danny Green and Tony Parker doing most of the damage. Green knocking down shots and TP was getting into the paint and nailing outside shots as well. The Spurs defense was in full effect as well as the rim was shut for Utah early in the game. However, the Jazz started to get to the paint including a monster dunk on Tim Duncan by Derrick Favors to close the gap. But the Spurs defense was just too much for the Jazz early in the game as San Antonio held Utah to 31.8% shooting (7-22). The Spurs shot a blistering 66.7%.

Recap – Gary Neal got the Spurs scoring going with a bucket to start the second with Manu Ginobili showing no signs of any back spasm issues which kept him out of the first two games of the season. San Antonio's defense was still firing on all cylinders, keeping the Jazz at bay, including Tiago Splitter showing much aggressiveness on both ends of the court. San Antonio got balanced scoring during the quarter including a few long distance bombs from Matt Bonner. Though Utah's Gordon Hayward would have a nice quarter (six points) but much like the first quarter, Spurs' defense was just too much for the Jazz.  Utah shot 45.2% while San Antonio shot 74.3%. Green continued to perform well scoring 13 points and going 3-3 from three-point line.

Recap – Utah came out firing hitting outside shots and scoring in the paint. Mo Williams got called for a flagrant one foul when he horse-collared Parker early in the second. The game got a little sloppy as Green coughed the ball up and TP got called for traveling. San Antonio cooled off from the field in the quarter after a hot-shooting first half. After a big lead of 19 in the first-half, Utah began chipping away at the lead as the Spurs' 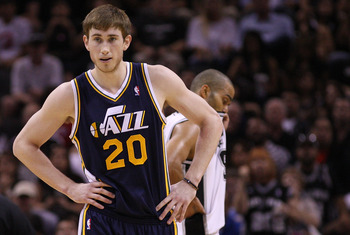 defense relaxed which allowed the Jazz to close the gap and head into the third quarter tied at 79. Utah went on a 13-0 run to end the third with Mo Williams hitting 11 points in that run.

Recap – Nando De Colo started the final quarter in place of Neal. Utah's Williams continued his hot -shooting keeping the Jazz in the game. More calls were made on the Spurs frustrating Splitter on the defensive end. He was much more aggressive defensively but the refs were quick with the whistle. Kawhi Leonard picked up up the defense for San Antonio which kept Utah at arms-length including key defensive rebounds. Green continued his hot play for the Spurs as he was driving to the rim, passing to TD for easy buckets, moving without the ball for easy scoring opportunities, and hitting his outside shots.

Jazz coach Ty Corbin on the Spurs: "They're a great team in their home building. You've got to believe you can beat them."

Tim Duncan on facing Al Jefferson: "He's a load. He's very skilled. I like the way he plays. I got to work the entire game to keep him out of his sweet spots."

Duncan on Kawhi Leonard's improved defense: "Pop is trying to turn him into that defender we need on the perimeter."

Gordon Hayward on the Spurs: "I think we just realized we've got to fight these guys."

Mo Williams on the Spurs: "San Antonio is a great team. I felt like we gave them too much respect when we came out."

Popovich on the return of Manu Ginobili: "He looked fine. He could have gone back into the game. He felt pretty good. I just opted not to do that."

Jazz Paul Milsap on the Spurs' win: "We put ourselves within reach to win the game, but their veterans came through."

Jazz Mo Williams on the Spurs: "I felt like we gave them too much respect coming out."