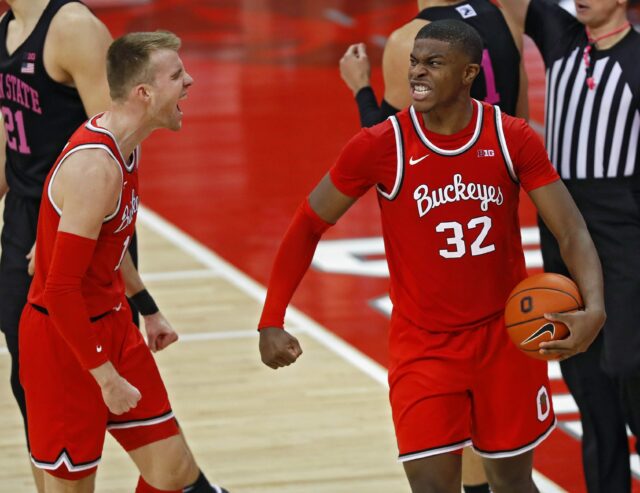 The San Antonio Spurs currently have a few first round picks to utilize in the 2022 NBA Draft. One of those later picks could turn into E.J. Liddell from Ohio State. The junior out of Illinois has worked incredibly hard on his body and different parts of his game for the three years he’s been in Columbus, Ohio.

The 6-foot-7, 240-pound forward has played himself into serious first round consideration because he just does everything for the Buckeyes. He’s their leading scorer, leading rebounder, and leading blocker. A pretty good combination for a team that made the NCAA Tournament and got to the second round. Here are his stats from his 32-game season.

Liddell has been an excellent source of buckets for the Buckeyes this past season and that’s despite garnering all the defensive attention from teams. He posts up well, hits midrange shots consistently, and is a threat from beyond the arc. His only problem is that he isn’t a fleet-footed forward who stands 6-foot-9 or taller. Otherwise, he does all of the little things and some of the bigger things teams like to see.

Defensively, Liddell is probably best served playing at the four and guarding the bigger forwards. He is strong to battle in the paint with them and shouldn’t be too slow to stay in front of them. If he is asked to guard a small forward or a quicker big man, he could be in trouble. He is more often than not going to be taken off the dribble and find himself in trouble. However, he is great on help side and post defense as that is where he racked up his blocks.

Despite being the focal point of the offense, he still found his teammates and if they hit shots more regularly, he would have had more assists. He’s a willing and able passer, especially out of the post. He’s a perfect late first round pick who has some clear NBA skills, but will also need some work in defining where he best fits and how to get there.