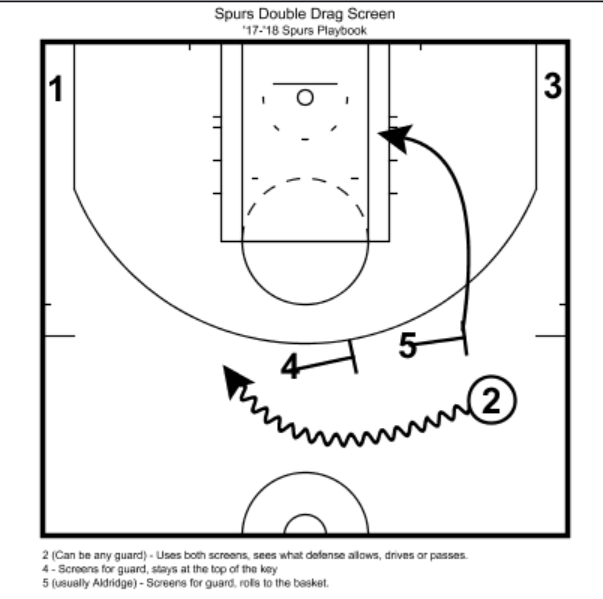 An action that the San Antonio Spurs, along with other NBA teams, run often to start possessions is the double drag screen. It is a simple action that can either generate a quick, open look from three, an open layup, or a post-up for Aldridge.

The action itself is pretty simple, whoever the ball-handler is receives two double drag screens at the top of the key from the two bigs. After they use screens, the ball-handler reads the defense and either passes it to another player on the perimeter or drives to the basket.

The first big to set a screen in the action, almost always LaMarcus Aldridge, rolls to the basket once the ball-handler uses their screen, giving him good post position to either post-up or crash the offensive glass. Here are some examples of this action being used against the Indiana Pacers from Sunday’s game:

In each of the five plays shown, Aldridge rolls to the hoop after setting his screen. This leads to two made baskets and one assist in just the five possessions during the video. While this action does often help Aldridge get good post position with spacing inside, it also led to an open three from Pau Gasol, a drive to the basket by Ginobili, and a drawn foul call by Ginobili.

Part of what makes this action effective for the Spurs is being able to place whatever guards or wings that aren’t initiating the action in the corners. These players are usually strong shooters from three, meaning their defenders would be hesitant to leave them to help defend or deny a pass to the rolling big. Rudy Gay and Gasol can also hit from distance, meaning that the big that doesn’t role to the basket is a concern on the perimeter for the defense as well.

This combination of screens and floor spacing means that the action often leads to an open lane to the basket, an easy pass into the post, or an open three.

Especially while Leonard is out, look for the Spurs to continue to run this action as well as other actions and set plays that give the Spurs the option to either get the ball to Aldridge in the post or to a capable shooter from beyond the arc.