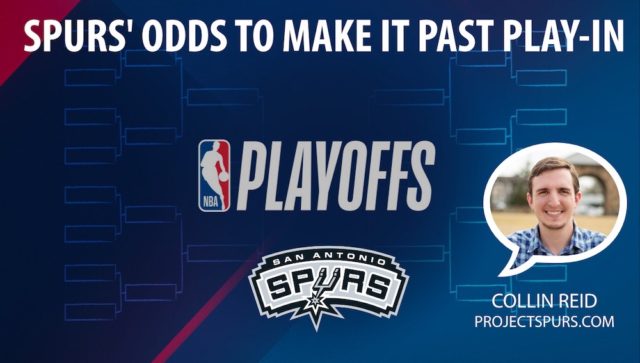 Project Spurs writer Collin Reid discusses the odds of the San Antonio Spurs making it out of the play-in and if making the NBA Playoffs is worth not having a lottery pick.

So what does that mean for the Spurs in terms of making the playoffs? So let’s look at it from a general kind of statistical standpoint first. So the Spurs will be the away team which they have performed better at this season. But as arenas get more and more fans, especially these teams in particular, who are teams that have fan bases that come out and root for their team quite a bit, and the Lakers, the Warriors and the Grizzlies, the Spurs playing, potentially, both of the play-in games away, does make things difficult for them.

So let’s just say in the first game, they have a 40% chance of winning, and then they win that game. And then in the second game, they have, let’s say a 35% chance of winning. So if those were the odds, kind of just straight up to make it into the playoff, the Spurs would have a 14% chance of making into the playoff. So it’d be a pretty low chance of them making it all the way in. And they do get to keep a lottery pick if they don’t make it. So this will be a good opportunity for the young players to play in a playoff-like setting while making the actual playoffs will be difficult. So now that is the statistical side of it. However, the one thing that kind of deviates from me here a little bit is one of the play-in teams will be one game away from making the playoffs no matter what. So the ninth and the 10th seed will play each other and the winner of that will play for a playoff spot.

So yes, it’s true that you know there’s a 14% chance the Spurs have to win two, they have to win two against good teams, etc, etc. But someone has to win in the 9/ 10 game. That right now that’s looking like Grizzlies vs Spurs, someone has to win that game. And whoever wins that game will be one game away from making the playoffs. And you can look at the stats and you can say okay, there’s a 12% chance or a 14% chance or whatever of the Spurs making the playoffs. But if you get to a situation where it’s one game away from making it, then all of a sudden, anything can happen.

So it’s going to be an interesting week, the Spurs certainly have the cards stacked against them. But it is going to be a situation where some of the younger players who haven’t played it quite as much in the playoffs or if at all, we’ll have an opportunity to play in kind of a bigger moment…