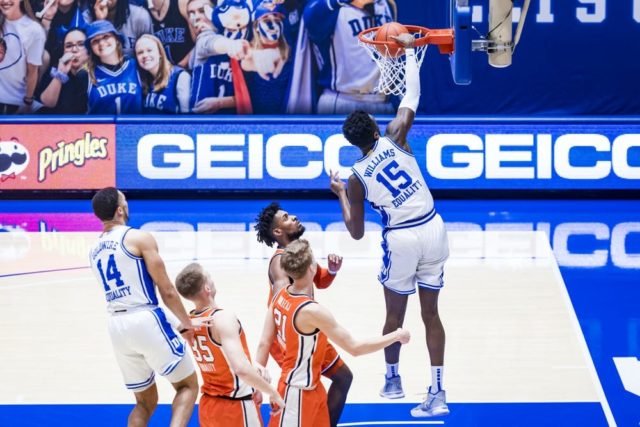 Mark Williams has catapulted himself into the first round of just about every mock draft thanks to his play this season. He struggled in his freshman season and much of that can be attributed to the overall bizarre season Duke endured.

He’s made up for that this season with a defensive presence and a known role that his confidence soaring.

The 7-foot-1, 242-pound center has been a monster on defense as described earlier. He’s had 20 blocks in his last four games alone and is clearly an option as a rim protector.

However, he can be a bit heavy-footed at times and that might limit his potential as a defender in the NBA. To get an idea of what he can do, here are Mark Williams’ stats so far this year (16 games) in about 20 minutes a game.

Williams has been an excellent rim protector this season and is averaging 9.5 blocks per 100 possession, has a 16% block rate, and is averaging 6.7 blocks per 40 minutes. I harp on the blocks because that is easily his greatest strength and his most translatable skill to the NBA. He’s also putting up these numbers in only half a game’s worth of playing time so consider that going forward.

The 7-footer is not an offensive threat outside of the paint and he doesn’t have plays drawn for him outside of alley-oops. Of the five starters, his usage rate is the fourth-highest at 18.6%, which emphasizes just how effective he can be despite not getting the ball all that often.

He would basically project as a high level garbage collector (and I say that with the utmost amount of appreciation for his skills). He will grab every rebound in his vicinity with a great motor and give you extra possessions when he’s on the floor.

The Duke Blue Devils sophomore will likely have some trouble guarding pick-and-rolls as he doesn’t move laterally all too well. However, if he can expand his offensive repertoire a bit and work on the foot speed, he should be a serviceable big man who can spell minutes for a guy like Jakob Poeltl. Williams is likely a mid-to-late first rounder so he may not be available to the Spurs, but if falls to their second round pick, he would be a major steal.