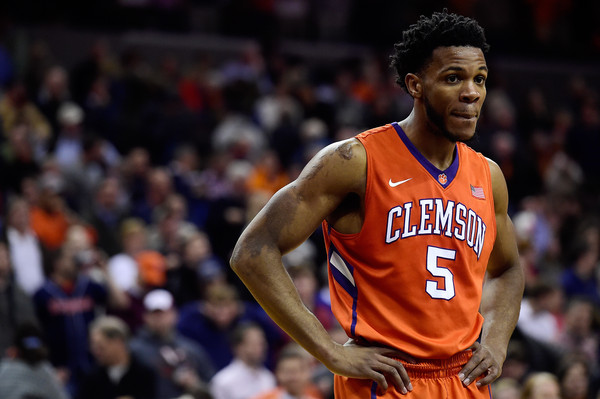 While June is a long ways away for most people, some of us are already salivating at the prospects entering the NBA Draft. For those with an interest in the San Antonio Spurs, that means they’ll be looking at either players overseas that will get stashed away there for years to come or some of the guys in college considered “lower tier” or not lottery worthy.

Fear not though! For I am here to give you the lowdown on all the prospects in college you may need to know about by the time June rolls around. Naturally, I’ll focus on those guys likely going in the late first round or are even fringe second round players since that is likely where the Spurs will be picking once again next year.

This week’s victim is Clemson’s Jaron Blossomgame. No, I didn’t make that name up, that is actually someone’s last name and it’s fitting considering the strides he’s made in his four years as a Tiger. He’s upped his averages every year with this year being a little down in scoring and shooting efficiency since he doesn’t have the ball in his hands at all times like he did last season. The 6’7”, 220-pound wingman is still putting up great numbers though seven games into his senior season.

Blossomgame is averaging 17 points, 1.3 blocks, one steal, 2.3 assists and 5.7 rebounds per game. While his three-point shooting percentage drop is alarming — 44.1 percent last to 14.3 percent this season — it can only be explained as a shooting slump of the worst kind — he is still shooting a strong 47.1 percent from the floor overall.

Blossomgame will become the focus of every team that plays Clemson this year so the fact he is keeping those averages up is impressive by itself. He considered going pro last year, but wasn’t quite in the range he hoped to be when he heard back from the NBA and teams.

He could be a good Manu Ginobili replacement (down the road) and may not need time in the D-League to get some real court time. He can guard multiple positions — a premium in today’s NBA — and is athletic and explosive getting to the rim. While he’s excellent at straightaway drives, he does not have a good enough handle yet to do much more than that.

His defense is where he can make his biggest mark though thanks to being multi-positional in that regard and he’s got a strong frame to go with the lateral quickness needed to guard smaller offensive players. He can also guard in the block because of his strong base and his only real weakness on that end of the court is being overly aggressive, which is easily remedied with even decent coaching.

Blossomgame is right on the fringe of the first round in a lot of mock drafts so he might be considered a reach when the Spurs get the chance to draft him, but he could be worth it if they decide they want some help this year rather than wait on someone else to develop overseas or in the NBADL.