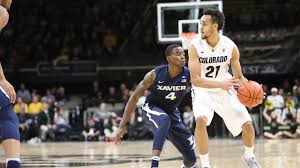 There is only one day left until the NBA Draft and that means we have one final prospect to look at before the big selection. This week’s draft prospect is Colorado point guard Derrick White. He’s one of the more intriguing prospects as he only played one year of Division-I ball, but he was not a freshman and he had played previously at D-II Colorado at Colorado Springs. Here are some of his measurables:

White’s one year of experience after dominating D-II might stun some people and make them wary of picking him, but I think it shows a maturity some other prospects lack. He knew he wasn’t ready for the D-I experience and took his time to get there, but when he did get there, he made it clear he belonged with those numbers he put up.

The taller point guard can score as well as he can dish out the ball to his teammates, but the main concern is with his streaky play at times. He can be a streaky shooter despite his high percentages, but that consistency can be fixed with proper shot training from an NBA coach. However, he is a high IQ ball player and could thrive under Spurs Head Coach Gregg Popovich and his staff given time and experience at the G-League level.

He has the size to play either guard spot, but his defense is going to need some work as he has been known to lapse there from time to time. With the Spurs, that will likely be fixed quickly though as they don’t tolerate guys not playing defense. His solid athleticism should help him get where he needs to be though and he can work on that with the Austin Spurs until he’s ready to move up.

White’s positives far outweigh his negatives so he would be a great player to get and it’s likely he wouldn’t last until the 59th pick, so he would have to be taken with the 29th for the Spurs. His ability to score the ball and still be smart enough to know when to distribute will be better than his propensity to turn the ball over by the time he ends up getting serious time for the team. His ability to generate points with his shot and at the charity stripe should be strongly considered at the pick as well.